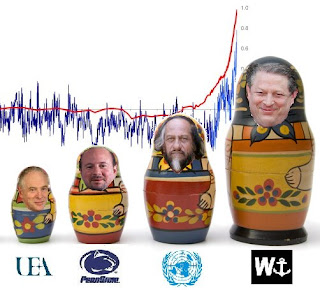 Listening to the Zambian environment minister at the Copenhagen slugfest talking to John Snow on Channel 4 News yesterday evening brought it home just how great the divide has become.

The lady could scarce bring herself to answer any questions, launching into a tirade at every opportunity about "climate justice" and about how the "rich countries" must be made to pay for the damage caused by their "overconsumption". It comes as no surprise, therefore, to see in the South African Times Live these sentiments:

Though there is a solid scientific consensus that human induced (anthropogenic) climate change is a real threat, there remains an inordinately influential and powerful lobby group that has thrown massive resources into undermining this consensus.

The "Climategate" nonsense is a sideshow that has used out-of-context and selective quotes from hacked e-mails to create the illusion of a conspiracy. Climategate proves only one thing: that those opposed to a deal are well funded and dogmatically unscientific.

More important, Climategate clearly highlights what author and analyst Naomi Klein has called a class war. In an interview during the summit, she said: "This conversation that has started here [is] about the real face of environmentalism, as a class war that is being waged by the rich against the poor."

That is the beast naked in tooth and claw. "Global warming" has become the totemic issue, the cause over which the "white man" can be brought to "justice" and atone for his sins. That these representatives of the developing countries believe in global warming is because they want to believe it – not for what it is, but for what it represents.

This is very much what I was alluding to in my earlier piece about former colonial nations seeking to exploit (not that they would use that word) the "white guilt" – a guilt that many lefties would acknowledge and fight to expiate.

This psychological driver is an important dynamic in the whole climate change "debate" as it transcends the science, which becomes wholly irrelevant. That the planet is warming up and "whitey" did it is an article of faith, thus explaining the easy dismissal of the Climategate "nonsense". Nothing, but nothing, is going to change that mindset.

Nevertheless, the cold blast of reality – along with the snow – is forcing its way into the Bella Centre. The negotiations have stalled and there is serious talk of delaying a decision for six months, rather than agree to a hasty fudge that will please no one.

The plan then is to bring forward the Mexico City summit to the summer, several months ahead of schedule, in the hope then that a deal could be reached. This is certainly the preferred option for Achim Steiner, head of UNEP, who says that, "A meaningless deal in Copenhagen cannot be in anyone's interests because it locks us into another decade of inadequate action and co-operation."

If time runs out there is always the option of stopping the clock and reconvening to get it right, he says, but adds that: " ... the risk is that that the momentum that is so characteristic of these 10 days in Copenhagen might be lost and then the world will struggle to take this further in the next six to 12 months."

That, however, is indeed the hope, one which may well come to pass as the implications of Climategate bed in and further details are revealed, as we have seen yesterday with the report on the use of the Russian data.

In truth, the leaked e-mails and documents came too late to influence Copenhagen – especially with the media so determined to bury its head in the sand – but the genie is truly out of the bottle and it is now going to be very difficult to ignore.

Now we might be in with a chance, with another six months to expose the obvious fraud behind what passes for science, and turn sentiment against a new treaty, in the knowledge that there are clear signs that the tide is already turning.

Not least, the likelihood is that we will have a hard winter behind us, with more of the population less inclined to believe the doomsayers when they have spent many of the preceding months digging themselves out of layers of that white stuff which was supposed to have become a folk memory.

But that brings as back to the Zambian environment minister and the South African sentiment, reflected in developing (i.e, former colonial) countries all over the world. Global warming is not about science – it is an article of faith and it does represent the political fault-line between developing nations and the West. No amount of debunking of the flawed science is going to change that.

It could well be, therefore, that views are too entrenched, easily to turn round the juggernaut. Even without the iconic global warming, the perception of the "class war that is being waged by the rich against the poor" will remain. The "class warriors" are not going to give up that fight just because the "white man" says the planet is no longer warming.

This presents an intriguing if not alarming conundrum. Global warming advocates have released their own, rather more powerful genie and that too is going to be hard to put back in its bottle. We might win the scientific argument – at least in the Western media. But that means nothing if the real fight is the "class war" – or economic war, as I would have it.

Add to that the central fact that there is so much money at stake in carbon trading and allied enterprises, and it is obvious that the financial beneficiaries are not going to give up without a fight. And then from a UK perspective, in six month's time we could have a new prime minister, who could prove as dogmatic and closed-minded as his predecessor.

Nevertheless, if a week is a long time in politics, six months is an eternity and who would have thought in early October that things could have changed as much as they have. As we pull apart the Russian dolls to find the last one empty, we might at least be able to redefine the battle and recognise it for what it is.

That would be a start – its own form of justice.

CLIMATEGATE THREAD
Posted by Richard at 00:12