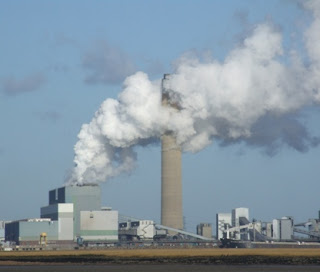 With almost savage delight, one can always enjoy the BBC's unerring ability to miss the main story as it continues to pour out its endless propaganda for and on behalf of the warmists.

Thus do we find Navin Singh Khadka, one of the Beeb's team covering the slugfest in Copenhagen, earnestly briefing us about the "Fight to control Copenhagen climate change fund", completely, utterly and totally missing one of the biggest scandals of our time.

Khadka is telling us that, apart from the headline battles in Copenhagen, "behind the scenes an equally big issue is being thrashed out. It's a fight for control of the massive new fund that will challenge our changing climate."

Too right there is a fight - he's got that bit right, but what he doesn't say is that the reason for it is that the existing funds are in the hands of a "carbon mafia" which is spending the so-called "green funds" on such delightful, carbon-busting projects as one of the largest coal-fired power stations in the world.

Thus, while our masters in the EU are closing down our existing coal plants, and no new plants are being permitted unless fitted – at enormous expense – for carbon capture, money from the long-suffering taxpayers of the UK and the rest of the developed world are being used to subsidise the building of a plant that will emit 25.7 million tons of CO2 per year for at least 25 years, adding another 643 million tons to an atmospheric carbon load.

And the ultimate irony is – actually, it is beyond irony – is that the plant will qualify for the UN's Clean Development Mechanism "carbon credits" which can then be sold on the carbon market, which UK generators will need to buy in order to continue producing electricity and keep the lights burning.

Approved by the World Bank on 8 April last year, the project is being part-funded by the Bank's International Finance Corporation (IFC), with an "A Loan" of up to $450 million, plus an investment of $50 million in equity. This was followed on 25 April by another loan from the Asian Development Bank (ADB), amounting to $450 million, both loans being on preferential terms because of their "green" development status.

What gives the project its "green" status – and thus permits World Bank and ADB funding - is that it employs what is known as "super-critical" technology. This – in theory at least - improves the conversion efficiency (of fuel to electric power) to some 44 percent compared with only 34-36 percent for conventional coal-fired power plants.

Piling irony on irony, this is exactly the type of power station which E.ON wanted to build at Kingsnorth in Kent, to which the greenies objected so much, even though future provision was to be made for carbon capture and carbon credits had to be bought to permit the plant to run.

Yet, in India, this is the seventh such plant to be built (or in the planning), justified as "green" because the type reduces the average carbon emissions of India's electricity generation system as a whole, per unit of electricity supplied. Nevertheless, this plant will not actually reduce total emissions. It will provide new capacity to a region short of electricity, so overall emissions will increase. Only the intensity of emissions will decrease.

However, as regards the plant itself, it will reduce coal consumption by three million tons, compared with a conventional plant. This gives a "saving" of 28 million tons of carbon dioxide in the first 10 years of operations which can be turned in carbon credits at a notional future value of around $20 each. This would yield an income of $560 million, based on the approval of an earlier supercritical plant built in North Karanpura, India. Crucially, this can be leveraged, to generate the loans needed to build the plant.

Thus, while a similar British plant, like Kingsnorth – if it ever got planning permission – would have to pay for the carbon credits to allow it to produce electricity, based on the CO2 emitted, the India plant will be paid for the notional amount of CO2 it does not produce, compared with less efficient plants - that scheme also making it more attractive to build such plants in the first place.

This then is where the BBC's Navin Singh Khadka comes in with his observations about the "Fight to control Copenhagen climate change fund".

The craziness of using clean development money to fund projects that actually increase emissions and – horror of horrors – uses coal has had the greenies screaming with rage, while other developing nations are complaining that the amounts being devoted to such expensive projects are soaking up the cash available for truly "green" projects.

Thus, there is a move at Copenhagen – which Khadka has picked up – to strip control of the management of development funding from the World Bank and to give it to a new body under the aegis of the United Nations Convention Framework Convention on Climate Change (UNFCCC) – which also administers the Clean Development Mechanism.

One of the champions of this switch is Pakistan – probably reflecting the overwhelming preponderance of funding which is going to India. "We have made it clear that we want the COP [Committee of the Parties] to have the authority over the new body that will control finance," said Farrukh Khan of, a co-chair representing developing countries in the financial negotiations.

However, both the United States and the EU oppose the formation of a new body. It is understood that the EU is insisting that existing institutions should be allowed to do the job as it believes that creating new ones will only cause delay, as has happened with the Climate Adaptation Fund that was formed two years ago to help developing countries adapt, but has yet to come online.

More particularly, the issue is about "control" as administration of the funds by another body would remove the ability of donors to dictate how they were spent. "It certainly is a big power game," said a senior European representative to Khadka. This man was actively involved in negotiations and told the BBC reporter: "The [new] fund will run into billions and getting to control it will mean you will be powerful in the world order."

Thus we see coal-burning power stations qualifying for green development money, justified by an "expert observer" noting that a Western politician said that his parliament would not allow him to give away money just like that, without knowing how much is being spent, who is getting it and what is it being used for. And if this is what is happening when we (supposedly) do know what the money is being spent on, and by whom, one can only imagine how it will be spent when we do not.

As for the rest, cheap electricity is a vital part of a competitive economy. Yet here we are burdening our own electricity suppliers with additional costs, some of which funds are then sent to our competitors in undeveloped countries, giving them an even cheaper cost base and even greater competitive advantage. No wonder we are going broke.

CLIMATEGATE THREAD
Posted by Richard at 22:28