What, asks Christopher Booker, in his column today, links the Copenhagen conference with the steelworks closing in Redcar?

The connection is Dr Rajendra Pachauri, the Indian railway engineer millionaire businessman, who also happens to be the chairman of the UN's IPCC, which is holding its slugfest in Copenhagen at the moment. Before he became thus elevated, Pachauri was made in April 2001 Director-General of the Tata Energy Research Institute (TERI), after having become its Director and head in 1981.

As its name might imply, there is a link between the Institute and the Tata Group. But it is no casual link. TERI was actually set up by a consortium of Tata Group companies, initially operating from the Tata Group headquarters. That firm, incidentally, can trace its origins back to 1868, when its founder, Jamsetji Nusserwanji Tata, established a trading company in Bombay, dealing in opium.

But from its humble if profitable beginnings as an opium trader, the Tata group, of course, is now owner of Corus Steel, which two weeks ago mothballed the steelworks in Redcar, throwing 1,700 workers on the dole.

This is also the same Corus which, as we reported last week, potentially stands to make £1.2 billion over the next three years by cashing in on now surplus EU carbon credits given to the firm, plus cash paid through the Clean Development Mechanism (CDM), gained by transferring Redcar's steel production to India.

Tata stands to gain from the CDM from being allocated credits for notional carbon "savings" gained from investing in a new steel plant in the Indian province of Orissa. Coincidentally, this will initially produce 3 million tons of hot rolled steel – exactly the capacity of the mothballed Redcar plant.

In another "strange but true" coincidence, the CDM scheme – which was set up to implement the 1997 Kyoto Protocol - is administered by the UN, of which Pachauri is a senior official. He is also one of the main cheer-leaders for the carbon trading scheme represented by the CDM.

Of course there is absolutely no posiible suggestion – as Booker makes clear - that Pachauri benefits personally in any possible way from Tata's exploitation of the various carbon trading schemes set up, even if it is the IPCC which provides the recommendations which drive those schemes. That is just a coincidence.

Nor can the railway engineer help it if last year, on official figures, buying and selling the right to emit CO2 was worth $126 billion across the world. This market, now enriching many of our leading financial institutions (not to mention Al Gore), is growing so fast that within a few years it is predicted to be worth trillions, making carbon the most valuable traded commodity in the world. Pachauri just helps make it happen out of the kindness of his heart. 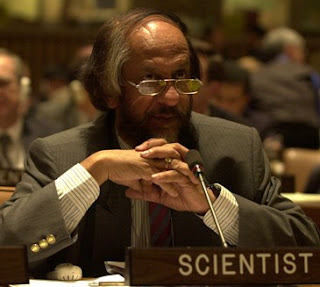 Nevertheless, Pachauri is clearly nervous of the connection between Tata and the institute it so generously established. Not only is there no mention of the connection on the institute's official web site, it is also curiously absent from Pachauri's personal website and his own carefully reworked cv, which can be downloaded from the site.

In fact, in yet another of those coincidences which seems to dog Pachauri, a year after he had been appointed chairman of the IPCC, the Tara Energy Research Institute was quietly renamed as The Energy Research Institute. The only overt link now is a listing of the politically safe(er) Tata Tea Limited – a wholly-owned division of the Tata Group – as one of the corporate sponsors.

Nevertheless, nothing had really changed. "We have not severed our past relationship with the Tatas. It's only (the change of name) for convenience," said communication manager Annapurna Vancheswaran back in January 2003.

However, the relabelling did leave the good doctor free to do his good works at the helm of the IPCC and TERI, without any obvious connection with Tata, thus allowing him to parade himself as a "scientist" rather than head of a multi-million dollar conglomerate set up by a multi-billion dollar conglomerate. And conglomerate TERI became. Pachauri has expanded his portfolio to become Director-General of The Energy and Resources Institute in the United States – an organisation which, through another of those curious coincidences, also bears the initials TERI.

One of the key directors of his US Board is Prof Timothy G Gregoire, who is J P Weyerhaeuser, Jr Professor of Forest Management, School of Forestry and Environmental Studies at Yale University. And in yet another of those coincidences, Dr Pachauri has just been nominated to lead the newly established Yale Climate and Energy Institute – at Yale University.

Sadly, there seems to be no end to these coincidences, as Dr Pachauri is also a trustee of another organisation, which just happens to be called TERI-Europe, with offices in Albert Grove, London.

When in London, Pachauri doubtless meets up with fellow trustee Sir John Houghton, also a member of the IPCC, former Chief Executive at the Met Office and founder of the Hadley Centre – creator alongside the CRU of the hadCRUT temperature dataset on which the IPCC relies for its doom-laden warnings. And, to keep them company, they have another doyen of the climate industry, fellow trustee Sir Crispin Tickell GCMG KCVO.

But, in one more of those entirely coincidental coincidences, we see that TERI-Europe has been quite busy completing a study which will bring warm feelings to the redundant workers of Redcar. This was a study on "Developing clean development mechanism projects for renewable energy technologies" which – in another coincidence which will have the Redcar Redundants leaping with joy – was sponsored by Mr Miliband's Foreign and Commonwealth Office.

This is, of course, terribly, terribly convenient – if not coincidental – because in 2006, British Petroleum announced it was funding TERI in India to the tune of $9.4 million to produce bio-diesel from Jatropha Curcas, a non-edible oil bearing crop – which could benefit from a renewable CDM.

The project – prop Dr Rajendra Pachauri – was expected to take 10 years and would cultivate around 8,000 hectares of land currently designated as wasteland with Jatropha and install all the equipment necessary for seed crushing, oil extraction and processing - to produce 9 million litres of bio-diesel per annum.

A mere year later, Tata Chemicals – a wholly owned division of the Tata Group - announced plans to "foray into biodiesel", disclosing that it was already in talks for securing the required raw material from "several leading plantation groups" that were engaged in growing Jatropha and pongamia plants on a commercial scale.

That, without any possible doubt, just has to be a coincidence – just as is the fact that the closure of the Redcar plant will help the UK meet the emission reduction targets that are currently being negotiated under the aegis of Dr Pachauri in Copenhagen.

And all this becomes possible because Dr Pachauri's friends have performed a miracle of our time, transforming carbon dioxide, a gas upon which all life on earth depends, into a "pollutant", worth more than diamonds, let alone oil. Forget Big Oil writes Booker. The new world power is Big Carbon. And many of those now gathered in Copenhagen are making a great deal of money out of it.

But, of course, Dr Pachauri is not one of them - absolutely not, no question of it ... quite improper even to think of the idea. Devil's Kitchen has got it totally wrong. Even if Pachauri's personal fortune (a closely-guarded secret) was well into seven figures - he is a "scientist". They have nothing to do with making money. Their only concern is with saving the planet. Believe me.

PACHAURI THREAD
Posted by Richard at 02:31