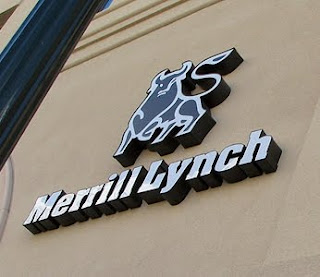 Abyd Karmali, global head of carbon markets for Merrill Lynch, says the markets will be watching the slugfest to see whether Europe commits to deepening its emission cuts from 20 to 30 percent by 2020. This could increase demand for tradeable carbon allowances, reports The Daily Telegraph.

And this, of course, is the same Meryll Lynch that employs Adair Turner as its Vice Chairman for its European operation, the man who is also a trustee of WWF UK and an enthusiastic member of the International Climate Change Taskforce set up by the Labour Institute for Public Policy Research think-tank, co-chaired by Labour MP Stephen Byers.

And it will come as absolutely no surprise to readers to learn that the Taskforce's scientific adviser is a certain Dr Rajendra K Pachauri. I wonder if he gets paid for that as well?

Not of course that Meryll Lynch's Abyd Karmali and Dr Pachauri are strangers. They met in December 2008 (and not for the first time) at a very exclusive little "do" in Poznan hosted by the Global Leadership for Climate Action group, itself a spin-off from the Club of Madrid.

Karmali and Pachauri were getting together for a "High-level Discussion on Climate Technology and Finance", alongside Peter Betts, Director of the UK's Department of Energy and Climate Change, and Katherine Sierra, Vice President, Sustainable Development, World Bank.

In attendance also were Uday Khemka, Vice-Chair of the Sun Group of Companies, Peter de Waal, Senior Executive, Carbon Banking, of the Fortis Bank, Brian Martel, Managing Director of the Environmental Capital Group and Monique Barbut, listed as CEO of the Global Environment Facility. Alongside were sundry other worthies, including Achim Steiner, Executive Director of UNEP, the parent body of the IPCC, and Mohamed El-Ashry, Senior Fellow, United Nations Foundation.

Strangely enough, Pachauri was not there in his capacity as chairman of the IPCC. He is listed as "Director-General, TERI" – not bad for the boss of an obscure Indian environmental "consultancy".

And now we have Meryll Lynch's Abyd Karmali - who is also president of the Carbon Markets and Investors Association - watching the slugfest for developments, with a very clear idea of what he expects to happen ... hmmm.

PACHAURI THREAD
Posted by Richard at 14:51