Going for the money 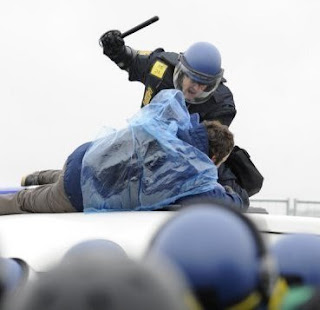 Despite the brave words Wednesday about holding out until the summer for a better deal, it looks as if the world's leaders are going all-out for a headline-grabbing agreement at the slugfest, determined not to leave Copenhagen until "the deal is sealed" – in the current vernacular.

Twelve figure numbers were floating around all yesterday, either a hundred billion dollars or euros depending on who you listened to, with increasingly wild emission cut figures proffered.

The reality, however, was broken by the New York Times which "leaked" (no scruples here, unlike certain e-mails) a draft UN document which purported to show that even if all the highest promises on emission cuts were kept, the temperature would still go screaming up to 3°c above the baseline – whatever that is – risking, according to the warmists, "runaway global warming".

You have to work very hard to find out why the world leaders seem so unconcerned about this prospect, the game being given away by the Zimbabwe Herald whose journalists obviously haven't sussed the importance of what they are writing.

From this august journal, we learn that the negotiations were "rescued from the brink of collapse" when delegates agreed to compromise on the two contending positions by keeping the Kyoto Protocol and devising another agreement to encompass the United States and its allies who have refused to ratify Kyoto.

This is nothing to do with the headline billions and all the rest. Nope, the deal is that the Kyoto Protocol is saved – which is what all the fuss was really about. That safeguards the carbon market and opens the way for it to expand to the $2-trillion level by the year 2020. Against that, even €100 billion is chump-change - you can buy countries with that sort of money.

Their deal in place, the kleptocrats and the Corporatocracy can go away happy and plan how to spend all their ill-gotten gains, leaving the leaders to grandstand, make their deals, shake hands and strut through their photo-sessions before jetting off in olumes of "carbon" to be greeted as saviours by their underwhelmed peoples.

As for saving the planet, well no-one really believes that greenie shit anyway ... except the greenies, and they don't matter. There is plenty of pepper spray left and no shortage of temporary detention space. Now that the money men have got what they came for, all the rest is theatre.

CLIMATEGATE THREAD
Posted by Richard at 00:59