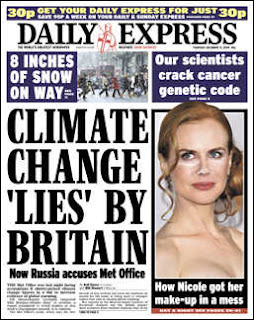 The Daily Express is onto the Russian story, in a big way – with another front-page story.

It has a spokesman for the Hadley Centre saying that "its scientists did not choose which weather stations to collect its data from." He says: “The World Meteorological Organisation chooses a set of stations evenly distributed across the globe and provides a fair representation of changes in mean temperature on a global scale over land. We don't pick them so we can't be accused of fixing the data. We are confident in the accuracy of our report."

On the face of it, the claim that CRU passively processes data chosen by the WMO simply is not true. Construction of the hadCRUT temperature dataset involved a significant degree of selection by CRU, as this e-mail in September 2004 from Phil Jones clearly shows. And this one in November 2008, also from Phil Jones, confirms that data are taken from a variety of sources, with individual nations supplying data direct.

In fact, just from the discussions in the e-mails, it is very clear that the selection process is a central part of the construction of the temperature datasets, a process in which the WMO is clearly not involved. Simply, the WMO supplies data via its "CLIMAT" network, which Jones could choose to use, or take directly from source.

The Hadley Centre is going to have to do much better than this. Simply compounding lies with further lies does not seem to be an adequate response.

CLIMATEGATE THREAD
Posted by Richard at 08:30