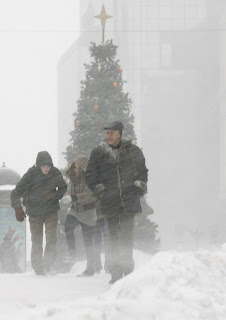 Moscow is covered in deep snow (picture left) and the snowfall in St Petersburg has broken a 130-year record.

Much further east, from the New York Times we learn that five days of blizzards and avalanches have paralysed the Russian island of Sakhalin, cutting off air and sea links to the mainland, stranding dozens of motorists on highways, and burying a train, along with three railway workers, under snow drifts 10 feet deep.

The island is frequently buffeted by storms that sweep in from the Pacific but the weather that began assailing it a few days ago has taken a remarkable toll. Blizzards began New Year's Eve, when an avalanche forced a diesel locomotive and snowplough off their tracks, and continued Friday, when three workers sent to repair the damage were swept up.

One was found alive, and rescue teams retrieved the body of a second Sunday morning. Though 140 soldiers were ordered to help dig the train out (pictured below), emergency workers said they had little hope of saving the third man since the tracks are still covered by about 350,000 cubic feet of snow. 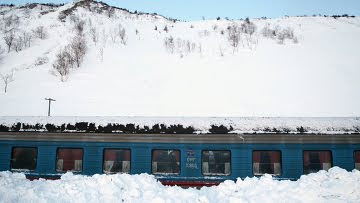 Last week, with the storm bearing down on the island, officials told people not to drive their cars outside the city limits, and they banned ice fishing until the storm had passed. Nevertheless, dozens of cars were buried in snow — in one village, rescuers dug out 56 cars, freeing 74 passengers. Cars that remain stuck are being provided with water, bread and fuel via snowmobile.

Hundreds of passengers have been trapped at the island's airport because of delays, and still more spent the New Year's holiday waiting for train service to resume. Four villages, with a total population of about 2,000, lost power as a result of the storm.