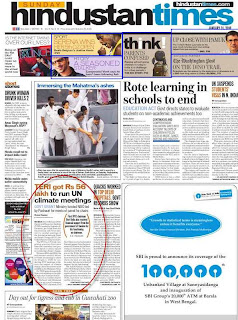 The Liberty News Central blog highlights an article on the front page of the Hindustan Times today (click to enlarge pic).

It is running a story on how Dr Pachauri's TERI was paid 5.6 million rupees (about £75,000) by the Indian Environment and Forest ministry to conduct IPCC meetings "to discuss the impact of climate change". Although relatively anodyne, the paper does raise the question of conflict of interest, provoking the ritual squawk of indignation from the good doctor.

"There is no conflict of interest," Pachauri says. "The first IPCC chairman, Prof Bert Bolin received substantial financial support from the government of Sweden for his functioning as chairman. The second chairman, Dr Robert Watson, was in the White House when he was elected chairman and then moved to the World Bank, where the bank not only paid his salary but also provided all support for his functioning."

Perhaps the difference is that Pachauri is head of a research institute which clearly benefits from talking up the "impact of climate change" – bidding for Indian government contracts on climate change issues - an institute which pays him an undisclosed salary, but one that is sufficient to support his extravagant lifestyle and his tenure in his £4.5 million house in Golf Links.

These issues, however, are not raised by The Hindustan Times but, says Gurmeet of LNC, the very fact that paper is raising such issues possibly signals the end of a long love affair with the good doctor. Given that most other media are hosting critical comment, that only leaves the Delhi television station NDTV on-side. Gurmeet wonders how much longer that will last.

With perhaps unconscious irony, the Hindustan Times cites in Pachauri's defence a gentleman by the name of Pradipto Ghosh, environment secretary at the time of allocation of these funds - and now a TERI fellow. A great number of current TERI fellows are former government officials, who go on to enjoy comfortable sinecures with the organisation they were so keen to fund while in office. But, of course, there is no conflict of interest.

Ghosh, a voluble defender of the faith, says there was nothing out of place in the allocation of funds. "TERI has been receiving funds from the ministry before and after my tenure," he states, as if that somehow made it better. But then Gosh has so much in common with Pauchauri - both being keen to develop the Indian carbon market - so it would be churlish also to accuse him of conflict of interest as well.

But the fact that the Hindustan Times carried a second article critical of Pachauri suggests that there is something amiss that even the loyal Mr Ghosh can't fix.