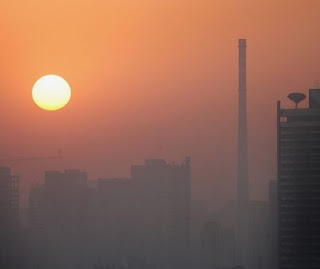 Although it has been a minor entertainment to bloggers and handled very low-key in the British and US media, "glaciergate" – as I suppose we must call it – has gone down a storm in India. The piece I did yesterday was the lead slot on the main English news channel in India. It is considered that important.

The reason, when you think about it, is not hard to fathom. While polar bears might be the global warming icon in the West, the "poster child" for Asian, and especially Indian, warmists has been the Himalayan glaciers.

And that is hardly unsurprising. Anything up to two (or is it three) billion people rely directly or indirectly on glacier-fed rivers in the region. And, as one wag said, if the Indian rivers dry up, there will be nowhere for them to put their pollution.

However, there is a broader political agenda here – or at least perceived as such – identified by this piece in The Times of India, which argues: "West uses 'glacier theory' to flog India on climate change".

From the Asian perspective – rightly or wrongly – global warming is seen as a mechanism being used by Western countries to hamper development, an interesting perspective as we see it from exactly the opposite stance.

Thus, we see the TOI charge that the IPCC's admission of getting its facts on Himalayan glaciers completely wrong "has again brought out concerns about the use of science, and again pseudo-science, to put pressure on India to take stronger action on climate change or to put greater responsibility for the climate crisis on it."

With environment minister Ramesh and India's senior-most glaciologist V K Raina the heroes of the hour, the IPCC has suddenly become the stooge of the West. Pachauri, once the idol who brought the Nobel prize to India, has acquired feet of clay. As the cheer leader for the IPCC, his stock is falling faster than Enron shares in November 2001.

The paper notes that the "2035 demise" date drawn by IPCC in its fourth assessment report for Himalayan glaciers was used very often to demand that India should take greater action to reduce its emissions in order to protect people from catastrophes like glacial melts and floods.

Similarly, it says, a "premature" release of information on the so-called Asian Brown Cloud (ABC) – pictured - was used by several western NGOs and governments to pin the blame on the melting of glaciers and other climate change impacts on pollution from burning firewood and cow dung in India.

But the paper also notes, without comment, that one of the key authors of the work on ABC was V Ramanathan of the US-based Scripps Institute of Oceanography – who just happens to be on the board of directors of TERI-NA (North America).

And now, the paper says, he is now going to be funded by the Indian government to carry out further studies on the issue at TERI, IPCC chairman R K Pachauri's institute.

If criticism there is, it is by juxtaposition, where the paper goes on to remind its readers that one of the earliest cases of scientific manipulation that caused furore was when the US Environment Protection Agency tried to pass the blame of climate change to poorer countries like India.

It had claimed that wet paddy fields in India were emitting very high levels of methane, an extremely high potential climate warming gas, but with very short life in the atmosphere – thus suggesting that India had to check its survival emissions.

It was later found, through research done independently in India, that emissions from wet paddy fields and animal husbandry in India were less than one-tenth of those of the US; EPA had claimed and that their impact was highly insignificant when compared to the large volumes of historical and existing emissions by the industrialised countries.

There, the piece ends, but the inference is obvious. R K Pachauri, chairman of the IPCC, is about to indulge in yet another bout of "scientific manipulation" and there are a lot of people who, all of a sudden, would like to see the back of him.

When Booker and I started on our "sustained vendetta", Pachauri accused us of being backed by "powerful vested interests". I wish. But, just because he is mad does not mean he is entirely wrong. There are powerful vested interests, but they are not all in the same tribe ... and there is war afoot. Pauchauri may be the first casualty, but I suspect he will not be the last.

First "climategate" and then "glaciergate", with "pachygate" waiting in the wings, has blown apart the comfortable mantra, "the science is settled" and re-opened the debate, like never before. Where it will end is anyone's guess, but it is going to be interesting watching as the developments unfold.

PACHAURI THREAD
Posted by Richard at 00:55