The way the money goes round 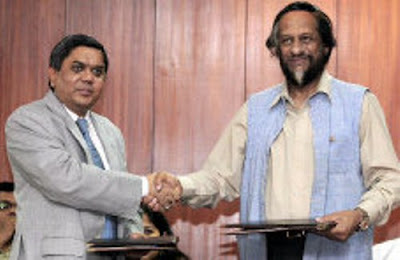 The happy snap shown above, taken at the end of March last year, shows Mr Tulsi Tanti shaking hands with a certain R K Pachauri. And despite the poor quality of the photograph, it is quite evident that Dr Pachauri has a demeanour not dissimilar to a cat that has just swallowed the cream – which, in a sense, he has.

Mr Tanti is no ordinary well-wisher. He is the chairman and managing director of the multi-million Indian energy firm, Suzlon Energy, which has major interests in renewable energy. It is the world's fifth leading wind turbine maker and also has solar power interests. And he has just signed an agreement with Dr Pachauri promising to fund a programme in renewable energy engineering and management at one of Dr Pachauri's spin-off enterprises, the TERI University.

The sum to be handed over – as so often – is undisclosed, but it is likely to be substantial. It will, of course, secure the goodwill of the chairman of the IPCC who will no doubt have warm feelings towards yet another of his Institute's commercial benefactors.

But this is by no means the full extent of the financial links between Suzlon Energy and Dr Pachauri, but through a trail so tortuous that no possible connection could be proved.

But following that trail provides a graphic example of the murky world of climate change financing, using a network of commercial companies, "charitable" foundations, NGOs and other activist groups, where huge sums of money can be channelled to organisations and individuals, with no accountability whatsoever and no means of identifying the original sources.

Returning to Suzlon Energy, we see an example of that dynamic in play – with absolutely no question of any money passing directly from the company to Dr Pachauri or any of his numerous enterprises.

It is, therefore, a complete and totally unrelated coincidence that Suzlon Energy owns a company called Hansen Transmissions International NV, an "established global wind turbine gearbox and industrial gearbox designer, with a leading position in the wind turbine gearbox market" – a company which, incidentally, has a considerable European presence.

It is, also a complete coincidence that, at the beginning of last year, Suzlon sold a ten percent stake in the company to a London-based investment house called Ecofin Ltd, a company with about $3 billion under its management, which specialises in the global utility, infrastructure, alternative energy and environmental sectors.

Therefore, it is just as much a coincidence that Ecofin Ltd - now earning a not inconsiderable amount from Suzlon - has a "charity" called the Ecofin Research Foundation, set up in May 2007 with a staff of one, the sole objective of which is to hand funds from Ecofin Ltd – its sole donor – to environmental "charities."

So far, Ecofin Ltd has given a few pounds short of £1 million to its Foundation and it is yet another complete coincidence that the major recipient of the Foundation's grants is an outfit called the European Climate Foundation (ECF), to the tune of £743,071 in the year ending 31 December 2008.

Thus, it is just another complete and utter coincidence that, in the grant year 2009, the ECF made a donation of an unspecified amount, direct to TERI India, to "facilitate meetings between Dr R K Pachauri and key European decision makers in support of an international agreement on climate change."

Thus, as we pointed out earlier, there is absolutely no connection whatsoever between that money, Suzlon Energy and Dr Pachauri. But then, there is absolutely no connection between the electricity that you use in your home and the supplier whom you pay. The electricity it and other utility companies generate all go into the same pot. What you take out at the other end could have come from anywhere.

Equally, however, it cannot be assumed that the ECF money was an altruistic gesture and came without "strings". As a study financed by the ECF points out, the payments are devoted to developing "a strategy to influence key decision makers". The "primary audiences are EU politicians and politicians from each member state," and a special "opinion leader" is Rajendra Pachauri, to whom the ECF has been so generous. His statements are "reckoned to have substantial influence on media and members of the primary audiences."

In fact, therefore, Suzlon Energy need not have been involved at all. Indirectly - several stages removed from the final destination - it is simply putting money into a pot. But it has to be said that what comes out the other end is by no means harmful to the interests of Mr Tulsi Tanti and his wind turbine business.

PACHAURI THREAD
Posted by Richard at 16:41