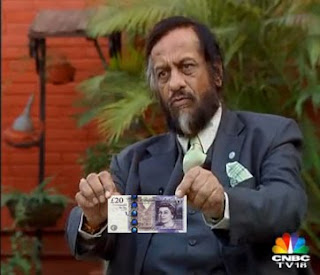 The first part of what is intended to be a two-part story is up on The Sunday Telegraph site.

This one is under the by-line of Robert Mendick who has used our work freely, referring to "a Sunday Telegraph investigation into the finances of TERI Europe ... ". We await the Booker-North version – the one we were commissioned to write – with interest although, from the look of it, much of what we wrote has already been used by Mendick.

This is the print-ready Booker-North version, as yet unpublished:

When Douglas Alexander travelled to New Delhi last September to announce Britain was presenting £10million to the Energy and Resources Institute (TERI), standing alongside him was an imposing, bearded figure.

Dr Rajendra Pachauri, is not only TERI's director-general but also chairman of the UN's Intergovernmental Panel on Climate Change (IPCC), which perhaps explains the Development Secretary's largesse with British taxpayers' money.

Best known for the moment when he stood with Al Gore to collect the Nobel Peace Prize, Dr Pachauri was the mastermind of the IPCC's latest monumental report on the dangers of global warming in 2007, giving him huge prestige and influence as the world's "top climate official".

Since being elected to the IPCC chairmanship five years earlier, he has coincidentally built up a worldwide network of business interests. He has been appointed to more than 20 positions, ranging from directorships and advisory roles to major banks and investment firms to serving as the first head of Yale University's new Climate and Energy Institute.

Dr Pachauri insists that the millions of dollars he receives for these posts are all paid not to him personally but to his Delhi-based institute. But during the same period he has also presided over a massive expansion of TERI's own empire, which now has five overseas branches, in North America, Japan, South-East Asia, Dubai and Europe.

Considerable mystery surrounds the financial affairs of the TERI group since its annual reports do not include its accounts.

There is, however, one branch of TERI for which we have been able to unearth a certain amount of information, because it is based in Britain and subject to UK law, and our investigations pose some questions which Dr Pachauri will not find it easy to answer.

TERI Europe is registered as a charity, based at what appears to be a private home in a quiet residential street in Merton, south London. The house's joint owners, according to the Land Registry, are Ritu Kumar, an "environmental economist", and her husband Nicholas Robins, a substantial donor to the Green Party, who has stood for the party in council elections and works as director of HSBC's Climate Change Centre of Excellence.

The directors of TERI Europe are Dr Pachauri and Ms Kumar, who is also its company secretary. Among various other jobs, she cites acting as a senior adviser on environmental issues to Actis, a private equity firm with $7.6 billion of investments in India, China and other parts of the developing world. She has also been executive director of the Sustainable Trade and Innovation Centre, a consultant to the Commonwealth Science Council and worked for the Commonwealth Secretariat.

This may help to explain why the official launch of TERI Europe in 2000 was not in a south London back street but in the imposing setting of Marlborough House off the Mall, the Commonwealth Secretariat's headquarters, with John Prescott, then deputy prime minister, as guest of honour.

In its early years, between 2001 and 2003, TERI Europe reported to Company House an annual income of around £60,000. But in 2004, just as it was widening its activities, including two contracts for the British Government, its declared income fell by more than a half. Since 2005, when new EU rules were coming in to exempt small companies from the need to show detailed accounts, TERI Europe has shown no figures for expenditure and income.

Although this has been quite legal, two things made it odd. The first was that, as a charity, TERI Europe still had to file accounts with the Charity Commission. So long as its annual turnover was less than £10,000, these would only have to show basic figures for income and expenditure, and would not have to include a trustees' report giving details of all its activities.

What made the figures very much odder, however, was that it was in just these years that TERI Europe was expanding its activities ever further. Our investigations have shown, for instance, that in addition to carrying out projects funded by the European Parliament, the EU and many other organisations, it has continued to receive substantial commissions from four UK Government departments, all of which seem curiously reluctant to disclose how much money was involved.

In 2004, TERI Europe carried out a major study on "renewable energy" for the Foreign and Commonwealth Office (FCO), and another on "Corporate Responsibility" for the Department for International Development (DfID). No cost figures for these projects are available.

These were followed by further projects on emissions reductions and climate change funded by DfID and the Department of Environment, Food and Rural Affairs (Defra). In 2005 Defra paid TERI Europe for a study on "the exposure and potential of the Indian insurance industry to cover risks related to climate change". Again no cost figures are available.

In 2007, however, TERI Europe published a report on sustainable development in India, "SI2", co-authored by Ms Kumar and acknowledging "generous support" from the FCO - and here we can at last arrive at some estimate of its cost, because TERI Europe was subsequently commissioned to produce two similar reports by the International Finance Corporation, part of the World Bank, which is rather more transparent with its figures.

The total cost of these two World Bank reports, along with a third commissioned from a group in China, is shown as $331,000, which implies that the two reports by TERI Europe, along with its earlier report for the FCO, must have generated a not dissimilar income.

Oddest of all, however, is the sum of £30,417 still shown on the Defra website representing money paid to TERI Europe in 2007, via "Cambridge University", in respect of work done by an unnamed "head of unit" towards preparation of a "Synthesis Report" summarising the contents of the IPCC'’s major Fourth Assessment Report.

One of the two co-editors of the Synthesis Report was Dr Pachauri. But when we asked Defra to identify the "head of unit" referred to, we were told that this was now a matter for the Department of Energy and Climate Change (DECC) - which refused to tell us any more.

We eventually learned, however, that the money was paid to a Dr Andy Reisinger, Dr Pachauri's co-editor on the report, who had worked for the UK Met Office's Hadley Centre but was now working for TERI India in Delhi. We further discovered that the £30,417 posted on the Defra website was reported by Defra in a statement to Parliament as having been only £5,800 (the IPCC itself also paid a further £400,000 towards this 52-page report, which was designed by the TERI Press).

Why Dr Reisinger's money was paid through TERI Europe, via an unnamed department of Cambridge University - and why the Government has been so secretive about details of this payment - thus remains as mysterious as much else about the financial affairs of TERI Europe.

The one thing all this made obvious, however, was that TERI Europe's income and expenditure in recent years were both much greater than the figures it declared to the Charity Commission.

When we put this to Ms Kumar, as a director and company secretary of TERI Europe, she admitted that our questions had brought to light "anomalies" in the charity's accounts. Its accountants have now been called in to produce a revised version.
The primary responsibility for ensuring that TERI Europe's affairs are in good order and comply with the requirements of the Charities Acts lies not just with the directors but with its board of trustees.

These include not only Dr Pachauri himself but also two other notable figures in the global warming story. One is Sir John Houghton, a former head of the UK Met Office who played a crucial part at the top of the IPCC through much of its existence. A third is Sir Crispin Tickell, the former diplomat who was responsible in 1988 for converting Mrs Thatcher to a belief in the dangers of global warming. This led to the setting up by Houghton of the Hadley Centre for Climate Change, which has continued to play a key role in the IPCC to this day.

If the Charity Commission’s investigation confirms these anomalies in the charity's accounts, its eminent trustees will be at the forefront of those asked to provide an explanation.

One interesting fact to emerge from our enquiries to the IPCC secretariat in Geneva is that, for his extensive work as chairman of the IPCC, Dr Pauchuri receives no salary but only expenses.

Just what Dr Pachauri himself earns from TERI, of which he describes himself to the Sunday Telegraph as "a full-time salaried employee", is not publicly revealed. Indeed, on Indian TV recently, in response to an article we published three weeks ago, he curiously claimed that "nobody in TERI gets any money for anything he or she does as part of his or her job".

But he certainly enjoys a lavish personal lifestyle, with his Delhi home in the Golf Links area, the most expensive stretch of residential real estate in India, and is famous for his array of "$1,000 suits".

One of his favourite themes is the threat posed by global warming to the world's poor, and that our affluent Western lifestyle is now "unsustainable". After Mr Alexander recently pledged that £10 million to TERI, to find ways of curbing poverty in India through "sustainable development", Dr Pachauri might have retired to his Golf Links mansion to meditate gratefully on Britain's generosity.

Now, however, he and his fellow trustees have one or two uncomfortable questions to answer about the conduct of his empire's outpost here in London.