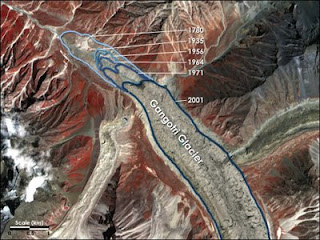 Continuing with the Pachauri-Hasnain "great glacier show", to which we introduced our avid readers yesterday, already we have seen significant developments which are set to make this a best selling saga.

In that first piece, we revealed that, to investigate fears of retreating glaciers in the Himalayas, raised largely by Syed Hasnain, the British government in 2001 funded a major field study code-named "Sagarmatha". We now learn that the sponsoring department, the Department For International Development (DFID), paid a cool (if you will forgive the use of that word) £315,277 of taxpayers' money for the work.

As we recall, that study, which reported in June 2004, found that the threat, that all of the region's glaciers may soon disappear, "would seem unfounded" and that "the catastrophic water shortages forecast by some experts are unlikely to happen for many decades, if at all." However, despite that, Syed Hasnain, continued to claim that the glaciers were shortly to disappear.

Not least, his claims appeared in the New Scientist on 8 May 2004, which stated thus:

THE great rivers of northern India and Pakistan will run strongly for the next 40 years and then die away, bringing flood followed by famine. That was the grim message last week from the first decade-by-decade forecast for the rivers that drain the huge glaciers of the Himalayas.

The problem is global warming, which has already increased glacier melting by up to 30 per cent. "But after 40 years, most of the glaciers will be wiped out and then we will have severe water problems," says Syed Iqbal Hasnain of Calicut University, Kerala, reporting the results of a three-year study by British, Indian and Nepalese researchers.

The study finds the biggest impact in Pakistan, where the Indus irrigates half the country's crops. Flows here could double before crashing to less than half current levels by the end of the century. But the declining flows predicted for the Ganges will also throw into disarray a vast Indian government scheme to avoid drought by diverting water from the country's glacier-fed northern rivers to the arid south.

What we now learn is that these wholly unsubstantiated claims were comprehensively rebutted by the lead scientist of the project, Gwyn Rees, in a letter to the New Scientist on 5 June 2004. Under the heading: "No floods, no famine," Rees wrote as follows:

As lead author of the report referred to in your article on glaciers in the Himalayas, I was shocked that the results of our three-year study could be so grossly misrepresented (8 May, p 7). As our report "An assessment of the potential impacts of deglaciation on the water resources of the Himalayas" concludes, the widespread perception that the region's glaciers will disappear within 40 years is ill-founded.

In many areas, water shortages are unlikely to happen for many decades - if at all. Some areas may benefit from increased water availability in the medium term. Catchments where glacial meltwater contributes significantly to the run-off, such as the upper Indus, appear to be most vulnerable to deglaciation. Eastern Himalayan catchments, benefiting from high summer monsoon precipitation, are less susceptible.

At no time did we suggest there would be a higher incidence of flooding, that famine would occur, or that an Indian government water-transfer scheme would be thrown "into disarray". The individual quoted in the article, though a member of our study team, clearly presented his personal view of the situation.

A clearer put-down of Hasnain's alarmism would be hard to find yet, as we record in our first piece, Hasnain continued making his baseless claims. And, in the next episode, we will see that he was still making the claims – or supporting them – into December 2009.

As it stands, therefore, the British government (i.e., British taxpayers) shelled out £315,277 to disprove Hasnain's claims. But, when WG II of the IPCC came to consider the issue of melting glaciers – funded by British taxpayers to the tune of £1,436,162 – it ignored the Sagarmatha report (which had also been written up in a per-reviewed journal) and went with Hasnain's not only baseless but also discredited claim.

The background to this, and subsequent developments, are now the subject of an ongoing investigation by The Sunday Times, the results of which will be published this weekend.

PACHAURI THREAD
Posted by Richard at 20:55