The tsunami all over again 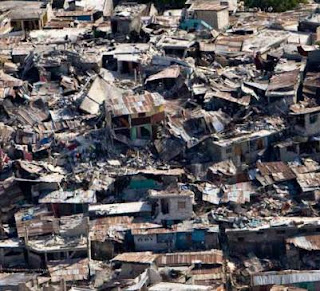 As the full horror of the disaster in Haiti begins to emerge, we seem to be going through a cycle which is all too familiar – most notable from December 2004 when the tsunami struck south Asia.

In the former category fell the United States which took the lead in forming an alliance with Australia, India and Japan, and within hours had despatched two battle groups fully equipped to deal with such an emergency, including 20 ships led by two carriers with 90 helicopters.

The EU, in the meantime, took nine days to launch a "donors' conference", the start of grotesque bidding process which had different nations vying with each other to be seen as the most generous.

In the immediate aftermath of the tsunami, president Bush pledged $35 million and then, under pressure from the media and other nations - to say nothing of the United Nations, which accused the US of being "stingy" - increased contributions to $350 million.

But, as was already becoming apparent, money was the lesser of the problems. What was really needed was immediate, practical assistance, and it was that which the US-led alliance was best able to give.

We remarked at the time that the collective value of the hardware that the US alone deployed was well in excess of $2 billion, yet the provision of this form of direct aid did not figure in the cash sums offered by the US government.

However, the EU sought to learn from the experience and has since attempted to enhance its capabilities. But, despite multiple initiatives to reinforce the EU's "emergency and crisis response capacities", all the EU could manage this time by way of immediate response was to hold a Brussels press conference led by Commission Vice-President Baroness Ashton, now the EU's High Representative – our new foreign minister.

This lacklustre response was noted by Booker in his column yesterday, who recorded how a scattering of bored-looking journalists in the Commission's lavishly appointed press room heard the former head of Hertfordshire Health Authority stumbling through a prepared statement, in which she said that she had conveyed her "condolences" to the UN Secretary-General, Ban Ki-Moon, and pledged three million euros in aid.

Despite the pretentions of the EU in building a rapid reaction force to deal with disasters, that was never going to come to much. But in its development aid – alongside the UN – the EU prides itself in being the world's leading contributor and a champion of third world development, standing in the forefront of fund-raising efforts.

Thus, again we see the same dynamic, with Claudia Rosett reporting that the tranzies are passing round the begging bowl, and it is left to the US, once again, to make the running.

Within hours of Port-au-Prince crumbling into ruins, the US had sent in an aircraft carrier with 19 helicopters, hospital and assault ships, the 82nd Airborne Division with 3,500 troops and hundreds of medical personnel. They put the country's small airport back on an operational footing, and President Obama pledged an initial $100 million dollars in emergency aid.

Yet, despite the tranzie's enthusiasm for collecting huge sums of money, very little seems to have been learned from the tsunami experience. A year after disaster struck – with $13 billion of aid pledged – much of it was unspent. Two years later, the situation was much the same, in what amounted to a running scandal. By 2007, there were calls to re-allocate the unspent funds.

Despite all this, the most "constructive" idea the EU has had to date is to call for an international conference. Yet Haiti has already had its fair share of such conferences, the latest being a donor conference, held in April 2009.

This was organised in the aftermath of four devastating tropical storms. At the time, there were peldges of $324 million over the next two years, short of the $900 million Haiti's prime minister said he needed, but the sum later increased to $760 million. However, by November 2009, only $21 million had actually been disbursed.

Some of the problem has been that much of the UN's efforts have been devoted to climate change – even in the context of disaster relief. And such is the obsession of the EU with the issue that its efforts on disaster relief have been similarly focused.

Yet, surveying the disaster that is Haiti, few will dispute that the high casualty rate and the ensuing chaos stems from the lack of effective governance over a very long period of time.

Thus, while US forces – aided by small aid contingents from other countries – are engaged in a desperate race against time to rescue trapped people and care for the immediate needs of the survivors, the real tragedy is that so little has been achieved before the event that would have better prepared Haiti for the disaster that has just struck.

On both counts, therefore – in terms of immediate relief and long-term aid, the tranzie nexus of the EU-UN has failed once again. And once again it has been left to nation states such as the US to pick up the pieces. One day the world will re-learn the lesson that trans-national agencies are an evolutionary dead-end and that the core or civilisation is and will remain the nation state.