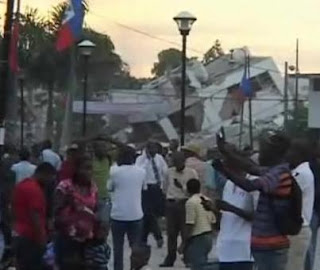 "Haiti is particularly vulnerable to climate shocks due to poverty, weak government and lack of infrastructure." So writes Oxfam in an expensive, recently-produced report on the effects of climate change and the need for adaptation measures.

It is rather a pity – if not a tragedy – that they did not spend a little more energy, time and money on urging better earthquake precautions.

But that is the curse of the developing word. Billions are being spent on "climate mitigation", with a goodly proportion of the money pouring into the pockets of NGOs and "think tanks", to produce endless reports, and numerous expensive conferences on how to deal with the perils of climate change.

But while the NGOs and their fellow-travellers get fat and rich speculating over the consequences of a hypothetical threat, the poor get poorer – and now they die. Still, I guess Oxfam will not be holding a climate change conference in Haiti any day soon.