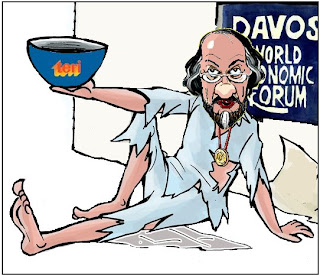 Having barely covered the ebb and flow of the controversy over "Glaciergate", The Daily Telegraph today weighs in with a lead editorial demanding: "Climate change: give us science we can trust".

Nonetheless, the trigger for this sudden concern is indeed the Himalayan glacier story, on the back of which we are blithely informed that: "The IPCC quickly admitted the error ... ".

The temptation, at this point is to stop reading. This is not information – it is disinformation. Followers of the saga know well that, through the whole process of constructing the passage on melting glaciers, the IPCC ignored reviewers' comments and we are all aware of Pachauri's arrogant dismissal of Raina's contrary view last December as "voodoo science".

Only after the "mistake" had been comprehensively outed by Jonathan Leake in The Sunday Times did the IPCC finally react, and then grudgingly, dismissing it – as the DT leader records - " ... as an aberration carried on just one page of a report thousands of pages long."

The leader, however, then notes that the weekend brought further disclosures that claims in the report blaming rising temperatures for an increase in the number and severity of natural disasters such as hurricanes and floods had not been properly reviewed by other scientists.

But then we get a bizarre assertion, that: "It is true that the first people to apologise for these errors and to promise to rectify them were the IPCC scientists themselves ... ". Last I heard (on a live link with NDTV to New Delhi) was Pachauri dismissing this report – as he so often does – as "lies", declaring that the IPCC would make a statement on it later this week, which it has yet to do. Currently, though it is denying any error.

Nevertheless, the Daily Telegraph – through rose-tinted glasses so dense that vision can hardly be possible – tells us that these scientists "... understand how important it is for the credibility of their case that the evidence on which it is based is copper-bottomed," then telling us: "it becomes difficult to resist the blandishments of the sceptics if a purportedly scientific document cannot be wholly relied on."

There betrayed is a curious mindset. If the IPCC documents could be "wholly relied on", then the sceptics would melt away. But it is the increasing evidence that the IPCC it itself a political organisation relying on junk science that sustains the sceptic movement. Desperately, the Telegraph seems to want to cling to its belief in global warming, and wants the IPCC to produce the documents to support that belief.

It thus offers the view that: "The most charitable interpretation is that the drafters were sloppy" - an extremely charitable view - then offering its recipe for improvements.

First, when the fifth IPCC report is prepared for publication, it says, any errors must be fully acknowledged and others removed. In addition, the report should contain contrarian evidence produced by scientists to demonstrate that this is a serious document, not a holy writ.

Second, it says. the chairman of the IPCC, Rajendra Pachauri, should step down. This will please environmentalists since he was appointed after the uber-sceptic George W Bush objected to his predecessor, Dr Robert Watson; but Dr Pachauri no longer carries the credibility that is required to take this hugely important debate forward.

We could not disagree with the idea of removing Pachauri, but what the paper evades is the idea that the IPCC itself – like its chairman – is fundamentally corrupt and completely beyond redemption. What is startling is the belief that any body spawned by the UN – of "food for oil fame" - could be anything other than corrupt.

However, so closely identified with the IPCC is Pachauri that his enforced departure would not only confirm his lack of credibility but fatally damage the IPCC itself. In a sense, the "environmentalists" are engaging in damage limitation. But the damage is already too severe. The whole edifice must go, and with it Pachauri and his begging bowl.

PACHAURI THREAD
Posted by Richard at 12:53