Pachauri: "no leeway for delay or denial" 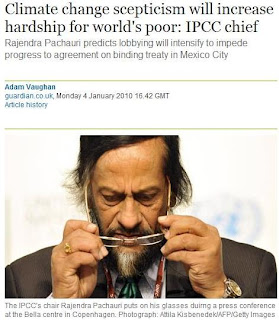 Multi-millionaire businessman Dr R K Pachauri - resident of 160 Golf Links, in the most exclusive residential area of Delhi (and thus India) - is weeping crocodile tears in The Guardian.

Climate change scepticism, he tells us, will increase hardship for world's poor, the good doctor predicting that lobbying will intensify to impede progress to agreement on binding treaty in Mexico City.

This is a man protecting his own turf, of course, and that of his billion-dollar backers who now have so much money invested in the global warming scam that there is no way this side of Hades that they are going to let go.

To make his wholly outrageous pitch, The Guardian gives him space for his own opinion piece but, while he dons the clothes of a modern-day Robin Hood, his real agenda shines through.

What Pachauri desperately need to do is cement in the few gains made at Copenhagen and, in particular, protect the carbon trading scam that was set up by the Kyoto treaty. Hence we see him telling us that "powerful vested interests and climate sceptics will work overtime to block legislation and discredit the science ahead of the next global climate summit in Mexico."

"It is a well-known fact," he asserts, "that powerful vested interests and those opposed to action on climate change are working overtime to see that they can stall action for as long as possible."

In his foetid, egocentric way, he thus sees "Climategate" as "the hacking of emails from the University of East Anglia. The use of private communications between the scientists" is an attempt to discredit his Fourth Assessment Report. Yet, to Pachauri, "these scientists are highly reputed professionals, whose contributions over the years to scientific knowledge are unquestionable."

It then says something of his state of mind that he links "Climategate" with our dissection of his business interests, turning this into a diabolical conspiracy. "The same group of climate deniers who have been active across the Atlantic have now joined hands to attack me personally," he writes, "alleging business interests on my part which are supposedly benefiting me as well as the Indian Tata group of companies."

That we then get the same old lies that he trotted out previously is hardly surprising, but one is amused to see him providing "background" – but very little - "only to highlight the fact that powerful vested interests are perhaps likely to get overactive in the coming months, and would perhaps do everything in their power to impede progress towards a binding agreement ... in Mexico City."

By this, Pachauri demonstrates that he has very little understanding of how the blogosphere works. But perhaps his ego could not allow him to acknowledge that a single blogger, originally unaided, has been able to reach out and land a blow at the heart of his corrupt empire.

So unlikely that it is that he can cope with the idea that anyone can be motivated purely by principle, with neither thought nor prospect of personal advantage, that he has to inflate his tormentor into a group conspiracy of "powerful vested interests". Would that he could see the source of his "attack" – the shock would probably kill him.

Despite his bluster, though, and the threat from his institute that, in the absence of an apology for attacking the great man, it would "take recourse to other measures it would deem appropriate," if the best he can do is write a piece for The Guardian, then we don't have a lot to worry about.

Certainly, Delingpole already has his measure and Bishop Hill is on the case.

For sure, we are taking a "hit" from these gentlemen, but they are working for Tata – not Pachauri. As soon as we have sorted them, I will post the letter on the blog – it is a classic of its type. Certainly, as it stands, we have no intention whatsoever of apologising or changing anything substantive that we have written.

As for Pachauri, he is turning out to be all bluff and bluster, but we clearly have him rattled. Rather than resort to the Mishcon de Reya route, though, he seems to think that "the spread of knowledge and awareness" is the most effective means of "thwarting the efforts of skeptics and vested interests."

What he does not realise is that "knowledge and awareness" is precisely what we are seeking, only our particular interest is in Dr Pachauri's financial affairs, about which he is still so coy. And far from thwarting the efforts of sceptics and vested interests, its spread is set to bring him down.

"There is no leeway for delay or denial any longer," Pachauri concludes. We agree – he should open up his books and let us see where he has squirreled away his millions.

PACHAURI THREAD
Posted by Richard at 21:18