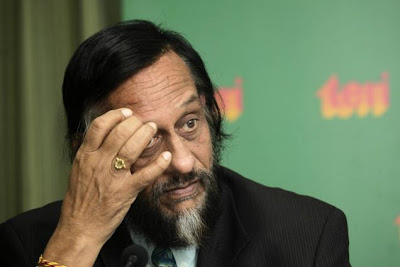 Headlined by The Hindu this morning is the announcement: "Pachauri remains evasive on issue of 'Himalayan blunder'".

A man who has been the darling of the media is thus finding the change of mood hard to deal with as he is reported as having, "declined to speak to the media on the Himalayan glacier goof-up issue amid questions being raised about the UN climate body's credibility in the wake of the controversy."

He was addressing an even organised by his own institute, TERI, whence he was bombarded with questions from the media who insisted that the issue was of global importance and his reaction could clear the air on the matter. However, says The Hindu, Mr Pachauri remained evasive and refused to budge.

Fending off the questions, an unusually defensive Pachauri told reporters, "I would hold a press conference on Friday on the issue. This event is strictly confined to the energy security-related matter," then adding: "I do not want to speak on the issue (controversy) right now." He also refused to react when asked if he was going to resign from his chairman's post.

His earlier taunt of "voodoo science" is now coming back to haunt him, as his credibility is beginning to look like the home of voodoo, Port au Prince, although the US Marines are not in place to drag him from the wreckage.

And behind the questions on "glaciergate", reporters are keen to ask about the accusations of "financially profiting from the influence of his UN role," his denials sounding less and less convincing as time goes on.

Maybe one of other of the Indian journalists may recall an interview with Dr Pachauri in January 2006 by Indian Express editor-in-chief Shekhar Gupta.

Then, he congratulated the former railway engineer for being an "institution builder", remarking that he built TERI with a Rs 3 crore grant, noting: "and I believe your assets are now nearly Rs 300 crore." That, in pounds sterling, is £40 million.

What would be interesting to learn is how much those asset values have increased in the four years since, who is the beneficial owner of those assets and why a supposedly charitable institute is building such a portfolio of riches, rather than helping the poor, about which Dr Pachauri expresses so much concern.

His thousand-dollar suits may turn out to be the least of his problems.

PACHAURI THREAD
Posted by Richard at 12:35