Amazongate in The Sunday Times 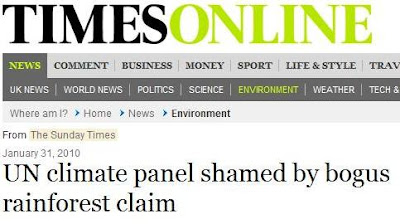 From Jonathan Leake in The Sunday Times we get an article headed: "UN climate panel shamed by bogus rainforest claim," - one of several on climate change in today's edition

It tells us that a "startling report" in the IPCC report claiming that that global warming might wipe out 40% of the Amazon rainforest "was based on an unsubstantiated claim by green campaigners who had little scientific expertise."

This is "Amazongate" writ large, where the IPCC launched the scare story that even a slight change in rainfall could see swathes of the rainforest rapidly replaced by savanna grassland – and the source turns out to be a report from WWF, an environmental pressure group, which was authored by two green activists.

They had based their "research" (Leake's quotations) on a study published in Nature which did not assess rainfall but in fact looked at the impact on the forest of human activity such as logging and burning. This weekend WWF said it was launching an internal inquiry into the study.

The detail is familiar to readers of this blog, and some might note a small addition at the end of the piece which says: "Research by Richard North", in what has been a fruitful partnership.

Crucially, Leake brings to the table the substance of an exchange with Simon Lewis, a Royal Society research fellow at Leeds University who specialises in tropical forest ecology. This is the same Simon Lewis cited by the BBC's Roger Harrabin, who has him say: "The IPCC statement is basically correct but poorly written, and bizarrely referenced."

Leake, who had extensive communications with the man, however, presents a completely different picture. Lewis describes the section of Rowell and Moore's report predicting the potential destruction of large swathes of rainforest as "a mess".

In a direct quote, Lewis goes on to say: "The Nature paper is about the interactions of logging damage, fire and periodic droughts, all extremely important in understanding the vulnerability of Amazon forest to drought, but is not related to the vulnerability of these forests to reductions in rainfall." Then we get Lewis saying: "In my opinion the Rowell and Moore report should not have been cited; it contains no primary research data."

Compare and contrast this with The Sunday Telegraph view that the IPCC had "accurately represented" the Nature paper.

Leake is clearly unconvinced, reporting that this is the third time in as many weeks that serious doubts have been raised over the IPCC's conclusions on climate change. And this weekend Rajendra Pachauri, chairman of the IPCC, was fighting to keep his job after a barrage of criticism – which is why The Sunday Telegraph writes a 750-word piece about his new novel.

Even the WWF takes it more seriously, saying it prided itself on the accuracy of its reports, but is investigating the latest concerns. "We have a team of people looking at this internationally," says Keith Allott, its climate change campaigner.

Scientists such as Lewis are demanding that the IPCC ban the use of reports from pressure groups. Georg Kaser, a glaciologist who was a lead author on the last IPCC report, said: "Groups like WWF are not scientists and they are not professionally trained to manage data. They may have good intentions but it opens the way to mistakes."

And, in its own leader, headed, "Bad science needs good scrutiny", The Sunday Times makes a comparison between Dr Wakefield, who has recently been savaged by the GMC, and Dr Pachauri who "is still head of the IPCC, although he presided over the use of dodgy science in its reports and ignored legitimate criticism of that science."

"He should go," says the paper.