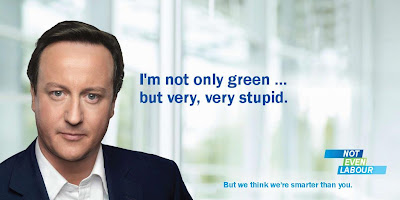 Regular readers might recall a time when a man called David Cameron – although we most often called him something else – was quite often the subject of our attention. But he is now rarely mentioned.

This, to a great extent, reflects his betrayal over the EU referendum, putting us in the position where have little interest in what he has to say and believe little of what he does. The very small residue of trust we had in Cameron's Conservatives has been totally and irrevocably destroyed.

If it were not for his destitute EU agenda, however, his obviously genuine enthusiasm for greenery – probably the only thing genuine about the man - would undoubtedly prove a similar barrier, as any man who can embrace the warmist creed with such gusto has to be all bad.

Yet another odious characteristic of the man is his insistence on a soft-left social agenda, draped in Tory clothes, demonstrating his credentials as a caring, family-orientated "leader".

But now, naked in tooth and claw, we are seeing the ugly side of "Compassionate Conservatism", where "call me Dave" is planning to combine his greenie obsession with his families package.

Thus we hear that motorists and air passengers face higher "green taxes" under Conservative plans to fund tax breaks for married couples. The money raised will be earmarked for a new "family fund" to cut income tax for families.

Options for taxation range from an increase in petrol duty to new levies on flights and firms that "pollute". But the Tories are also considering reintroducing the fuel-duty escalator - abandoned by Labour following widespread protests over the high cost of filling up.

Needless to say, "call me Dave" and boy George Osborne, the shadow chancellor, are cautious about discussing these taxes "after earlier plans backfired," and not least because some MPs (rightly) fear they could lose the party votes.

But this dire pair remain insistent that, in time, "green taxes will be necessary". Osborne even says: "Green taxes on environmentally-damaging activities and consumption will fund our family policies in the long term. We are committed to them."

Despite all that has happened in the last few months, and the very obvious signs of a change in public sentiment on "global warming", this pair have not yet cottoned on to the fact that green taxes will be about as popular as a Moslem fundamentalist at a BNP meeting.

But the ultimate stupidity, which clearly has not percolated into what passes for brains in this dire pair, is the failure to join up the dots, and understand that the "families" they purport to want to help are the very ones which will be hit hardest by "green" taxes under consideration.

Only thus could they come up with such a moronic idea of easing the financial plight of [some] families, only to claw it back in accordance with a greenie mantra that is long past its sell-by date. The only possible explanation for this is that, stupid as Cameron and Osborne undoubtedly are – they believe they are smarter than the electorate they are trying to con.