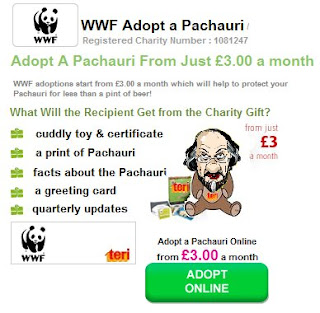 A quick catch-up on the fall-out from our stories yesterday about Pachauri lining his pockets.

The Financial Post tells us that "The Sunday Times has discovered that the same bogus claim has been cited in grant applications for TERI," while The Daily Express copies out the story without attribution.

Melanie Phillips, on her Spectator Blog, picks up on the Booker version and Andrew Bolt calls for Pachauri to be investigated.

The Indian news agency DNA gives the issue a fair outing, stating that, "Pachauri cooked up facts to corner grants." Indian TV on Times now also repeats the charge and we're even getting minor US sites reporting the details.

One of the more interesting reports has a warmist in the hot seat. This is Australian scientist, Professor Andy Pitman, who was a lead author on the IPCC's 2001 and 2007 reports. His interrogator is Elenor Hall, and we see this exchange:

ELEANOR HALL: Well, the head of the IPCC Rajendra Pachauri, is now being seen to benefit from that false Himalayan glacier claim with a funding grant to his institute. That just plays right into the argument of the sceptics, doesn't it, that climate scientists are making all of this up in order to get funding for their research?

ANDY PITMAN: I would have to admit that it looks extremely bad. I don't know what the nature of the full proposal was in Pachauri's application. It would certainly be focused on a whole range of areas of climate change and climate science or impacts.

The summary that you refer to would reflect the broad nature of the proposal but probably not the detail but absolutely it looks bad.

This, incidentally, is under the heading: "Climate scientist says sceptics are winning," something which the National Review Online might endorse. Andrew Stuttaford thinks the controversy is only set to deepen, and he is not wrong. In the Indian Business Standard, however, Pachauri complains: "The skeptics want to continue with their lifestyle and ruin the environment. My conscience does not allow it." Interestingly, he says nothing of his own lifestyle.

Even the Sydney Morning Herald is on the case, though, even if you get nothing of the controversy from our own Financial Times. Despite that, American Thinker wonders how much longer Pachauri can survive. And so do we ... now that the WWF seems to think he is a endangered species (see pic).

PACHAURI THREAD
Posted by Richard at 17:31