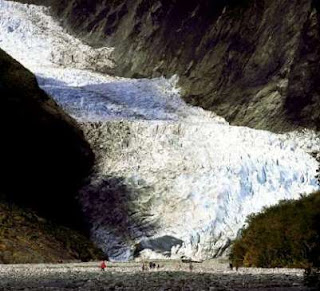 It is a characteristic of Dr R K Pachauri that he reacts to any criticisms in an entirely negative manner, responding with a combination of denial, bluster and invective in equal measure.

Thus, it was no surprise that, when confronted with doubts about the veracity of claims in the fourth IPCC assessment report (AR4) about the melting rate of Himalayan glaciers, he should have described an Indian government report that criticized the claim by the IPCC as "voodoo science."

The blustering Pachauri, however, has not been able to make this long-standing issue go away. And, although it has been grumbling on for some time - getting a thorough airing in the Pajamasmedia blog in early December – it has now re-emerged as a major story in today's issue of The Sunday Times.

Under the heading, "World misled over Himalayan glacier meltdown," Jonathan Leake and Chris Hastings tell us that the warning in the IPCC report that climate change will melt most of the Himalayan glaciers by 2035 "is likely to be retracted after a series of scientific blunders by the United Nations body that issued it."

The pair go on to catalogue the blunders made by the IPCC, confounding the claims by R K Pachauri that the AR4 offered "far-reaching and meaningful conclusions".

The central claim, of course, is that the world's glaciers were melting so fast that those in the Himalayas could vanish by 2035. But, so Leake and Hastings tells us, in the past few days the scientists behind the warning have admitted that it was based on a news story in the New Scientist, a popular science journal, published eight years before the IPCC's 2007 report.

It has also emerged that the New Scientist report was itself based on a short telephone interview with Syed Hasnain, a little-known Indian scientist then based at Jawaharlal Nehru University in Delhi – a very far cry from the rigorous, peer-reviewed process that Pachauri claims gives his report its authority, even more so when Hasnain now admits his claim was "speculation" and not supported by any formal research.

What The Sunday Times does not raise, however, is the singular fact that Pachauri has a direct vested interest in talking up the early demise of the Himalayan glaciers. As we reported in mid-December, the institute that pays his wages has a share in a lucrative €3 million EU research project called "High Noon", aimed at assessing the effects of the Himalayan glaciers retreat, caused by climate change.

On this project, Pachauri is remarkably silent, but it is unsurprising that he should launch so vehemently into the attack when his Armageddon scenario is challenged, given that his financial interests are at stake. And that is another characteristic of Pachauri – he is never so voluble as when protecting his own interests.

PACHAURI THREAD
Posted by Richard at 15:13