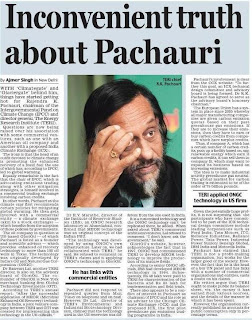 The Indian Mail Today again takes up the Pachauri story, under the heading: "Inconvenient truth about Pachauri".

Ajmer Singh, who wrote the earlier piece on "conflict of interest", this time covers some more of Pachauri's commercial interests – his involvement in the Houston oil technology firm GloriOil and the proposed India Climate Exchange (ICX).

With GloriOil, the irony, writes Ajmer, is that the head of an outfit devoted to climate change is promoting the enhanced recovery of a fossil fuel the use of which has, according to IPCC, led to global warming. Equally remarkable, he adds, is the fact that the chair of IPCC, which is advocating emissions trading along with other mitigation strategies, is himself involved in a commercial trading exchange involving carbon credits.

In other words, Pachauri as the climate czar first recommends certain policies for mitigating global warming. He then gets involved with a commercial entity — a climate exchange (akin to a stock exchange) — which benefits from the adoption of those policies by governments.

Some of the murky tale of GloriOil is told here but Ajmer adds to the details, noting that the company — of which Pachauri is listed as a founder and scientific advisor —provides enhanced oil recovery technology to more than 100 oil wells in Texas.

Dr Pachaur's Indian commercial venture, TERI Biotech, often claims that it was the pioneer in this field but here we are told that the technology was originally developed by India's Oil and Natural Gas Corporation (ONGC).

This comes from R V Marathe, director of the Institute of Reservoir Studies (IRS), an ONGC research laboratory at Ahmedabad. He confirms that MEOR technology was ONGC's concept, stating: "The technology was developed by using ONGC's own infrastructure. Later on, we had collaborated with TERI."

However, Dr Lal, director of TERI's Environmental and Industrial Biotechnology Division, claims that the technology used in the US reservoirs has been "customised" but, bizarrely, when asked about TERI's commercial ambitions and ventures, his response was: "I don't know, ask the government."

Here, though, the story gets even murkier as Ajmer reveals that the technology, which GloriOil was licensed to use, was given to it at what amounted to the knockdown price of £50,000 while the charge for implementation and field trials had only been just over £100,000. Given that TERI have been paid just over £4 million by ONGC for what amounted to extended field trials of the technology, GloriOil seems to have benefitted from an extremely generous deal.

Much more has yet to come out about Dr Pachauri's raft of commercial ventures and his relationship with Big Oil, but today we have seen another corner of the carpet lifted, and had a quick peek inside. The full story of GloriOil, however, has yet to be told.

Nevertheless, Ajmer turns to what "also appears to be a conflict of interest", as he highlights Pachauri's role as as chairman of IPCC, and his role as an adviser to the Chicago Climate Exchange ( CCX) and the proposed ICX, the first pilot greenhouse gas emissions trading programme in India.

Pachauri's involvement is clear from the CCX website: "To further this goal, an ICX technical design committee and advisory board is being formed. Dr R K. Pachauri has agreed to serve as the advisory board’s honorary chairman."

The global market for carbon trading is estimated to be of the order of £75 billion and, given the potentially huge profits, it is not surprising that the participants who have committed to be part of the ICX technical design committee include leading corporations such as Ford India, Tata Motors, ITC, Reliance Industries, Reliance Power, Tata Power, Indowind Power Suzlon/ Senergy Global, IBM India and Motorola India.

Pachauri, writes Ajmer, has claimed that TERI is not a profit-making organisation, but works for the larger good of the society. However, the fact that he is the head of a key UN panel and has links with a number of commercial organisations and entities, casts a doubt on his claims.

Amjer thus concludes that his critics argue that TERI ought to make public its balance sheet, viz. the money it has earned from various sources, and the details of the manner in which it has been spent. However, the organisation currently publishes its accounts for public consumption only in percentage terms.

Surprisingly – or perhaps not - Pachauri did not respond to repeated queries from newspaper, either by telephone or e-mail. He may find, though, that ducking the hard questions does not make them go away – as he will see in The Sunday Telegraph tomorrow.

PACHAURI THREAD
Posted by Richard at 11:44