A man with no honour 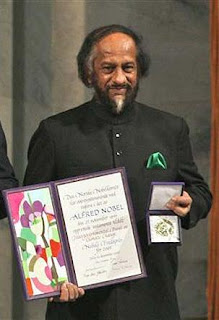 The Indian Economic Times is reporting that the British government is to carry out due diligence on Dr Pachauri's pet institute, TERI, following "a local newspaper's relentless campaign against the organization and its director general."

This is from the Department for International Development which has issued a statement declaring, "As is routine, DFID is undertaking a full Institutional Assessment of TERI as part of our due diligence process." But, as the Economic Times somewhat ironically notes, "A newspaper's persistence seems to have triggered the routine".

It would, of course, have been slightly more appropriate had DFID carried out its "due diligence" before its secretary of state Douglas Alexander had announced a present of £10 million from us, the British taxpayers, having noted the organisation's consistent refusal to publish any meaningful financial details in its annual reports, the latest example being a model of obfuscation.

With Pachauri's London operation, TERI Europe, having blatantly doctored its own accounts, and its director and company secretary having admitted to "anomalies", promising to submit "revised" accounts to the Charity Commission, alarm bells should be ringing in the DFID headquarters, with serious questions being asked as to whether any UK funds should be given to this organisation.

More to the point, as WUWT notes, we have in Dr Pachauri a man who seems incapable of distinguishing between his public office and his business enterprises, demonstrably using the one to benefit the other.

This is a man, moreover, who seems to lack any sense of personal responsibility. He has been quick to take all the plaudits for the Nobel prize awarded to the IPCC, in his acceptance speech declaring:

Will those responsible for decisions in the field of climate change at the global level listen to the voice of science and knowledge, which is loud and clear? If they do so at Bali and beyond, then all my colleagues in the IPCC and those thousands toiling for the cause of science would feel doubly honoured at the privilege I am receiving today on their behalf.

But, when confronted with the false claim about melting glaciers in his 2007 fourth assessment report, he first tried to dismiss criticisms as "voodoo science". Now, faced with overwhelming evidence that the report is wrong, he tries to walk away from the controversy, saying he has "absolutely no responsibility." Amazingly, he asserts: "It's the work of independent authors ... they're responsible."

Happy to take the "honour" on their behalf, his responsibility apparently ceases the moment his colleagues' work is questioned. This is a man with no honour.

PACHAURI THREAD
Posted by Richard at 12:12