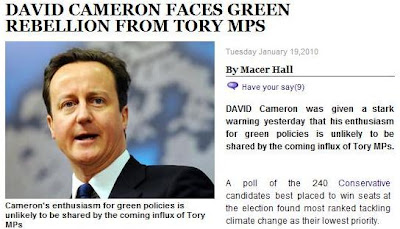 According to The Daily Express (and others), David Cameron "was given a stark warning yesterday that his enthusiasm for green policies is unlikely to be shared by the coming influx of Tory MPs."

This is the conclusion from a poll of the 240 Tory candidates best placed to win seats at the election. It found that most ranked tackling climate change as their lowest priority.

However, talk of a "rebellion" is probably highly optimistic. Cameron has already made his views clear, stating in December: "A very small number of people take a different view on the science, but the policy is driven by me, and that is the way it is going to be."

It is unlikely that newly elected Tory back-benchers are going to rock the boat, especially as the "high flyers" have recently been sent on a green re-education course to ensure that they are "on message" for the coming election.

When promotion beckons, and the ministerial car awaits, principles tend to go out of the window. Thus, what you see with Cameron is, unfortunately, what you are likely to get – sheer, naked greenery.