The greatest eurosceptic of them all 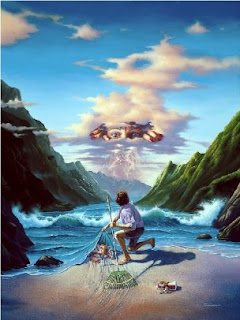 At the end of December, the Met Office was confidently predicting that it is "... more likely than not that 2010 will be the warmest year in the instrumental record, beating the previous record year which was 1998."

With the prediction reliant on the el Nino effect, Joe Bastardi has some very bad news for Mr Hirst and the chaps and chapesses in Exeter. El Nino, he says, is collapsing, falling apart, finito, kaput ... finished. And so is the hottest year ever if we have OBJECTIVE measurements.

With the current freeze – and more bad weather on its way by mid-week and the distinct possibility of it lasting until March – this can do nothing but reinforce the emergence of a cooling trend. It will also line us up for another bad winter at the end of the year.

Technical and narrowly focused these issues might be, but one must never lose sight of the political implications. Not only has Brown nailed his flag to the global warming mast, so has Cameron and – of course – the European Union is deeply committed to the new religion.

This is what makes this subject fascinating – and so important. Rarely have we seen governments so committed to such an intrusive and ruinously expensive policy on such a slender base, and even rarer is the prospect of a spectacular and highly visible collapse of the very foundations of that base.

Highly damaged already by this winter, another tranche of freezing conditions will further stretch the patience and tolerance of the population and strengthen resistance to government's climate change initiatives. A poor or even moderate summer, followed by another rough winter will destroy the political legitimacy of any climate change policy.

What is more, this is happening under the radar of the mainstream political commentators – who are more personality than issue focused. They tend to leave climate change to the specialist environmental correspondents, not realising the profound political implications of a spectacular policy failure.

Thus, the potential for extreme political damage is high, especially as many politicians are behind the curve and totally out of touch with their electorates. They will find themselves quickly out of their depth and struggling to cope with the political fall-out.

The beauty of this is that the damage is likely to be spread across the board, taking in not only national governments, but the EU as well, hardening sentiment against an organisation which is already damaged by the constitutional Lisbon treaty process. The collapse of its climate change policy, on top of economic and other stresses, could fatally weaken the construct.

How ironic it would be then if the greatest eurosceptic of them all turned out to be Mother Nature.