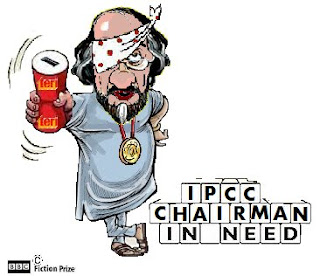 So asks the French blog Objectif Liberté, a question effectively answered in the affirmative by the Indian news agency DNA.

Previously a Pachauri supporter, it retails how the Indian government is distancing itself from one of its erstwhile favourite sons, with the news that the government is thinking again about appointing the good doctor to the prestige position of head of the prime minister's national solar mission.

This is the national programme which is leading the drive to produce 20,000 MW of solar electricity by 2022 and one that would have cemented Pachauri even more firmly in the halls of power – with plenty of opportunities to drive some lucrative consultancy business in the direction of his institute, TERI.

But "sources" are now saying that the embarrassment over Pachauri is so acute in Delhi's power corridors that he is no more on the list of hopefuls likely to head the unit. Until a few weeks ago, government sources say, he was leading the race and considered a shoe-in.

Pachauri's fall from grace seems roughly to coincide with a certain article in The Sunday Telegraph on 20 December. But his contemptuous treatment of environment minister Jairam Ramesh cannot have helped.

Ramesh is actually quoted by DNA, complaining: "I was dismissed for peddling voodoo science, but the ministry was right on the report on Himalayan glaciers." And it has now emerged that there was a crisis meeting held in New Delhi on 28/29 December, under the aegis of the United Nations Environment Programme (UNEP) – one of the sponsoring bodies for the IPCC - to discuss the 2035 claim on glaciers.

Although the meeting was held at the TERI offices, Pachauri was not present in a group of glaciologists brought together from throughout the world, but Ramesh was. Dr Syed Hasnain was also present and the UK was represented by Dr Viju John of the Met Office's Hadley Centre.

At the meeting, Prof Murari Lal, one of the lead authors of Chapter 10 which made the 2035 claim, admitted it had been made on the basis of a report of the WWF report that had quoted Hasnain. But he dismissed media claims that the year 2035 had "crept in the report by mistake." However, Hasnain denied mentioning any such date "in his scientific papers".

The meeting decided that the rate of retreat stated by the IPCC "does not appear to be based upon any scientific studies and therefore has no foundation", concluding that: "The upshot is that the critics are correct ... there appears to be no scientific foundation for the IPCC's prediction for the year 2035."

Despite that, it took the IPCC until 20 January to issue a grudging statement, regretting "the poor application of well-established IPCC procedures" but making no admission that the claim had "no scientific foundation".

Yet, right up to the day before the statement, Pachauri was telling reporters: "We are looking at the issue and will be in a better position to comment on the report after examining all facts," with no hint that a statement was imminent – or that the issue had been settled nearly three weeks earlier.

That, of course, was after the "non-mistake" had been outed on 17 January by Jonathan Leake in The Sunday Times, raising the question of whether Pachauri had any intention of correcting the IPCC report.

It is possibly this reluctance to admit error, as much as anything, which has done the damage. Now, as Leake points out in the video above, the man lacks credibility.

Rubbing that in, the DNA report goes on to note: "A recent report in the British media had found that IPCC's prediction that 40% of the Amazon rainforests were threatened by climate change was not based on scientific knowledge, but documents compiled by a journalist," and then adds for good measure:

UK journalists have also alleged that since Pachauri became vice-chairman of IPCC in 1997, The Energy and Resource Institute has expanded its interest in every kind of renewable or sustainable technology along with the Tata Group to invest $1.5 billion in vast wind farms.

Nevertheless, Ramesh is currently saying that the Indian government is not demanding Pachauri's resignation. But it does not need to - the writing is already on the wall. Even UN spokesmen in New York, normally only too pleased to talk about "climate change" in their routine press conferences are avoiding the subject and refusing to answer questions.

The man is finished. It is only a matter of time before he is forced to walk.

PACHAURI THREAD
Posted by Richard at 00:13