Glaciergate – still a long way from the truth 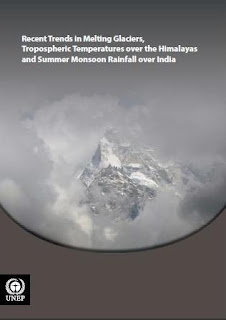 Evidence is building that IPCC claim that Himalayan glaciers were going to melt by 2035 was not only a deliberate fraud, but efforts were made to cover it up when the figure was challenged.

Some of the pieces of the jigsaw are already there in the public domain, starting with Ben Webster's piece in The Times on Saturday – which we analysed in this post. This made it clear that Rajendra Pachauri was appraised of what he now claims was a "mistake" by an Indian science journalist, last November.

But the story is taken further by Jonathan Leake in The Sunday Times today, under the heading: "Panel ignored warnings on glacier error". There, he reports that the leaders of the IPCC had known for weeks and probably months about the "error" and had even convened private conferences to discuss it.

Although he refers to the last of such conferences, which was hosted by TERI in Delhi last month (28 December), there is no mention of the fact that this was organised by the United Nations Environment Programme, the sponsoring body for the IPCC itself.

Although it was a pre-planned meeting, it turned rapidly into a crisis "workshop" of international glaciologists, which decided that, "the IPCC conclusion that the Himalayan glaciers could melt by 2035 may have to be revised ... ", adding that: "there appears to be no scientific foundation for the IPCC's prediction for the year 2035."

Although Rajedra Pachauri is not listed as an attendee, his senior glaciologist, Syed Hasnain was there, and so was professor Murari Lal, one of the lead authors of the glaciers section of the IPCC report. In all, there were fifteen TERI personnel at the workshop, including Hasnain, and TERI University is cited as a collaborator in the production of the subsequent report (cover illustrated).

Given that the meeting was actually held in the TERI offices, with so many TERI personnel there, it is inconceivable that Pachauri – director general of TERI and chairman of the IPCC – was not appraised of its findings, especially given the importance of the issue.

Apart from the implications for the IPCC, what may of course have been preoccupying Pachauri was that, on 15 January, there was to be a high-profile launch of the collaborative programme on glacier research, funded by the Carnegie Corporation, at which the president of Iceland, Dr Ólafur Grímsson, was to be the star guest.

It takes little imagination to surmise that Pachauri would not want to be embroiled in a controversy over glaciers with such a prestigious event in the offing – especially, as we see from Carnegie grant statement that the research project was based on Hasnain's false claim that glaciers "will vanish within forty years as a result of global warming … resulting in widespread water shortages."

This brings us to Hansain himself, who was leader of the TERI glaciology team. Building on our work on the timeline of Hasnain's claims, Leake makes it abundantly clear that not only were Hasnain's claims false, but he knew them to be so. 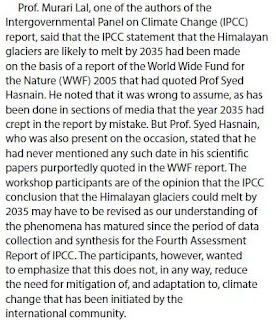 In particular, as party to the Sagamatha study which was concluded in June 2004, Hasnain had signed up to the conclusions that suggestions the region's glaciers might soon melt "would seem unfounded".

That Hansain persisted in his false claims, right up until September 2009, and then sought to defend the IPCC claim in the face of Raina's report published in November 2009, is to say the very least, perverse – more so when the leader of the Sagarmatha survey, Gwyn Rees, had re-emphasised in May 2009 that, "It is unlikely that all glaciers will vanish by 2035!"

With Hasnain by then employed by Dr Pachauri's TERI, and reliant on grant-funded work from the Carnegie Corporation and the EU "High Noon" programme – which had been initiated on the basis of Hasnain's false 2035 claim – there is a very obvious motive for Dr Hasnain to keep the controversy out of the limelight.

Thus it was that only after the falsehood had been "outed" by Leake on 17 January, that Pachauri began to acknowledge that there was a problem, but then very grudgingly. Two days after the Leake report, all he would concede was: "Theoretically, let's say we slipped up on one number ...".

With Hasnain claiming he was "misquoted" – which was never the case - and Pachauri maintaining that the inclusion of the figure was a mistake, this has all the hallmarks of a clumsy cover-up which continues to this day.

Exposing the Pachauri lie is lead author professor Murari Lal who told the UNEP workshop back in December, "that it was wrong to assume, as has been done in sections of media that the year 2035 had crept in the report by mistake" (see inset, above right).

Yet even to this day, the IPCC is still talking about an "error", thus perpetrating the lie, and concealing from the public that false information was deliberately included in the IPCC report. "Glaciergate", it seems, still has a long way to go before we get to the truth.