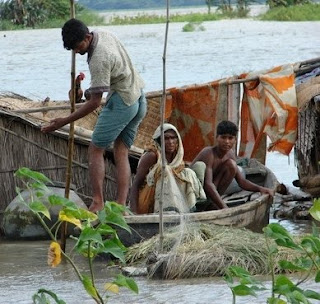 One can hardly admit surprise at the report in the Mail on Sunday which has the scientist "behind the bogus claim" on melting Himalayan admitted that the offending section "was included purely to put political pressure on world leaders."

This is from Dr Murari Lal, the lead author of 4AR's chapter on Asia. He also said he was well aware the statement did not rest on peer-reviewed scientific research. "It related to several countries in this region and their water sources," he says. Thus: "We thought that if we can highlight it, it will impact policy-makers and politicians and encourage them to take some concrete action ... It had importance for the region, so we thought we should put it in."

Lal, in making this admission confirms that which we have known, and asserted, for a long time – that the IPCC is not a scientific body. It is political institution, dedicated to delivering a highly political message in single-minded pursuit of its global warming agenda.

What we learn, therefore, ties in perfectly with the report from the Global Warming Policy Foundation, which sets out in detail the attempts to modify the Himalayas section, and the blank refusal of Lal to make any changes.

As such, the 2035 claim can hardly be called a mistake – or even representing of failure of the IPCC processes. Lal did what he was supposed to do, and then defended his work to the hilt, as indeed did Pachauri until forced to concede the "error".

No doubt, there is a similar political agenda behind the false claims by the IPCC linking global warming to an increase in the number and severity of natural disasters such as hurricanes and floods. This false link has been highlighted by Jonathan Leake in The Sunday Times today – but there is much more to his report than meets the eye.

The story is also picked up by The Daily Mail and The Daily Telegraph but none of the papers so far have pursued the motivation behind this newly reported "error".

In fact, there is little to go on, a yet, but already it is clear that the driver behind this particular scam is as much financial as it is political. And behind that is the lucrative re-insurance industry which sees in "climate change" several business opportunities.

One is the ability to dump its liabilities for what are defined as "climate related events", drawing instead on a newly-created global catastrophe insurance fund underwritten by the governments of the developed states. Another – already up and running – is the Global Index Insurance Facility (GIIF), a World Bank-backed scheme designed to allow developing countries to take out insurance against "the increased risk of climate-change related storms and extreme weather events."

It also explains the role of one of the leading research institutes on climate change, the International Institute for Applied Systems Analysis (IIASA), based near Vienna in Austria which, under the guidance of Shonali Pachauri, daughter of Rajendra – has taken a special interest in climate change and insurance, alongside Oxfam and the WWF.

Strangely enough, much of the work is sponsored by Munich Re and its Munich Climate Insurance Initiative (MCII), initiated in April 2005 – of which Dr Pachauri's TERI is a founder member, actively contributing to the development of various schemes.

Dig a little deeper and you will find the European Climate Forum and behind them is the Potsdam Institute for Climate Impact Research.

Further embedded id the Geneva Association, formally known as the International Association for the Study of Insurance Economics, which has produced a detailed report (152 pages .pdf) on the issue, under the presidency of Nikolaus von Bomhard, chairman of the management board, Munich Re Group, Munich. It's a small world.

However, if there are no fully established schemes in place yet, that is because the development of global financial packages is still work in progress. Although insurance featured in 4AR and was discussed at Copenhagen, ideas have not fully matured.

Nevertheless, this will be one of the main concerns of the fifth assessment report, with working group II already considering the matter under the generic heading of "Managing the Risks of Extreme Events and Disasters to Advance Climate Change Adaptation".

Meanwhile, we have another of those cosy little cartels, where powerful vested interests are getting together to ramp up public concern in order to enrich themselves, all in the name of saving the planet.

This time, though, they are not getting a free run at it. Concerned at the rising costs of premiums – not least because of the increasing levies from the re-insurers – causing customers to drop out of the market, the retail insurers are fighting back, questioning the global warming hype.

Despite all that though, Dr Pachauri's TERI is keen to offer its expertise in dealing with the "visible impacts of climate change" (for a fee, of course), and supporting Munich Re and its MCII initiative, arguing for the creation of a multi-billion adaptation fund.

But, whenever there is some cash to be made, there is always a Pachauri around.

PACHAURI THREAD
Posted by Richard at 21:28