The end is nigh

Less than a week after he claimed the IPCC's credibility had increased as a result of its handling of the "Glaciergate" scandal, Pachauri's own personal credibility lies in tatters as The Times accuses him of a direct lie.

This is about when he first became aware of the false claim over the melting glaciers, Pachauri's version on 22 January being that he had only known about it "for a few days" – i.e., after it had appeared in The Sunday Times.

However, Ben Webster writes that a prominent science journalist, Pallava Bagla – who works for the Science journal (and NDTV as its science correspondent) - claims that last November he had informed Pachauri that Graham Cogley, a professor at Ontario Trent University and a leading glaciologist, had dismissed the 2035 date as being wrong by at least 300 years. Pachauri had replied: "I don't have anything to add on glaciers."

Bagla interviewed Dr Pachauri again this week and asked him why he had decided to overlook the error before the Copenhagen summit. In the taped interview, he asked: "I pointed it out [the error] to you in several e-mails, several discussions, yet you decided to overlook it. Was that so that you did not want to destabilise what was happening in Copenhagen?"

Dr Pachauri replied: "Not at all, not at all. As it happens, we were all terribly preoccupied with a lot of events. We were working round the clock with several things that had to be done in Copenhagen. It was only when the story broke, I think in December, we decided to, well, early this month — as a matter of fact, I can give you the exact dates — early in January that we decided to go into it and we moved very fast."

According to Pachauri, "... within three or four days, we were able to come up with a clear and a very honest and objective assessment of what had happened. So I think this presumption on your part or on the part of any others is totally wrong. We are certainly never — and I can say this categorically — ever going to do anything other than what is truthful and what upholds the veracity of science."

Without even Bagla's input, we know this to be lies. Apart from anything else, there was the crisis meeting under the aegis of UNEP - which we reported on Thursday – which concluded that the 2035 claim "does not appear to be based upon any scientific studies and therefore has no foundation".

Separately, we have Syed Hasnain, while stressing that he was not involved in drafting the IPCC report, claiming that he noticed some of the mistakes when he first read the relevant section in 2008.

That was also the year he joined TERI in Delhi, headed by Dr Pachauri. Then, he says, he realised that the 2035 prediction was based on an interview he gave to the New Scientist magazine in 1999. But, he claims, he did not tell Pachauri because he was not working for the IPCC and was busy with his own programmes.

"I was keeping quiet as I was working here," he said. "My job is not to point out mistakes. And you know the might of the IPCC. What about all the other glaciologists around the world who did not speak out?"

However, Hasnain's assertions contrast rather sharply with a video interview given by him to NDTV (see clip above) on 9 November 2009 – the day that the Raina report on glaciers was published, challenging the claims made in the IPCC report. Then, he is seen to be defending the 2035 figure, and allowing himself to be styled as "author of the original IPCC report". 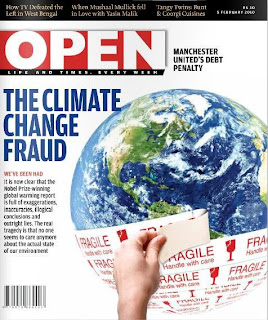 According to The Guardian, V K Raina, formerly deputy director general of the Geological Survey of India, has joined calls for Pachauri's resignation.

The Guardian cites India's Economic Times from over a week ago, which criticised the IPCC for damaging its own credibility, noting that "it would now seem that Mr Pachauri's steadfast unwillingness to consider an alternate position could well have given climate sceptics a stronger footing."

But today, the Deccan Herald also weighs in, declaring: "The [glacier] incident reflects poorly on the professionalism and scientific rigour of the IPCC and has done damage to its credibility." The writing is not so much on the wall as obliterating it.

Adding to the graffiti, in yet another development, the popular Indian magazine Open rips apart global warming, labelling it: "The Hottest Hoax in the World." Indian blogger Gurmeet in Liberty News Central thinks this could be the most hard-hitting article in the Indian MSM on AGW fraud ever.

Given what is about to descend upon him on Sunday, by the time the Indian media have absorbed the detail, Pachauri will be history.

PACHAURI THREAD
Posted by Richard at 00:26