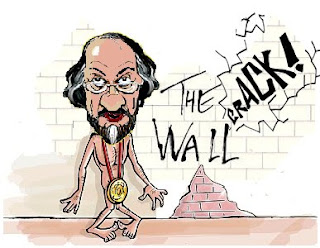 How typical it is for the BBC to enter the Glaciergate fray, giving a subtly distorted and one-sided account of events, without mentioning the "conflict of interest" issues that have been highlighted by this blog and subsequently by a number of MSM outlets.

As I have observed before, censorship and distortion is manifest most strongly in what organs like the BBC don't say, as much as what they do.

Thus, all we get from the Beeb is a travesty of the "state of the art" in their supposed summary, where they state: "Some commentators maintain that these developments, taken together with the contents of e-mails stolen last year from the University of East Anglia's Climatic Research Unit, it undermines (sic) the credibility of climate science."

Having presented this shallow pastiche, they then give the floor to the chairman of the IPCC, with this laughably distorted narrative, on the issue of his resignation:

But a defiant Dr Pachauri said: "I want to tell the sceptics... who see me as the face and the voice of the science of climate change, I am in no mood to oblige them; I am going to remain as chairman of the IPCC for my entire term."

What Pachauri has not yet come to terms with is that he is "dead man walking". It is not a question of whether, but when he is drummed out – although some would like to see him stay in place to deliver AR5, thereby ensuring it completely lacks credibility.

In fact, if AR5 is to have any credibility at all, Pachauri must go, which is precisely the argument of Richard Tol and others in Der Spiegel yesterday – a view shared by many warmists.

That said, as evidence mounts, the only rational view of AR4 is that it is fatally flawed. Pointing that out, Watts up with that picks up on "Amazongate" and such is the great value of such posts that we see a commentator picking up an error in my original piece.

Frankly, I am too tired to address it now – I don't know what this relentless grind is doing to Pachauri (although I can guess), but it is also taking its toll this end. However, we are in this for the long haul, and will do whatever it takes to bring this charlatan down (a man, for all his bluster, has walked away from his initial threats of taking action against me.)

Nevertheless, the correct version of events is even more damning than my initial analysis, but it will take a little work to write up the detail, so I will post that later today. And then Pachauri will be one step closer to oblivion.

He may think he is going to remain in office, but then so did Nixon.

PACHAURI THREAD
Posted by Richard at 01:39