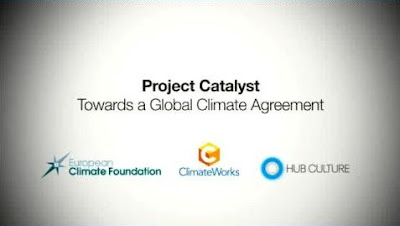 For all that Dr R K Pachauri has his hands deeply embedded in the till, he is actually a small-time chancer, made good. The really big money lies elsewhere, and he is just on the edge of it, picking up the crumbs. This comes home when we return to look at the mysterious European Climate Foundation (ECF) and follow through some of the sponsors – or "funding partners" as they prefer to call them.

One of those was the Ecofin Research Foundation, which we looked yesterday, finding that it had donated just a few pounds short of £1 million to get the ECF off the ground. But this is small beer compared with what other "funding partners" have given.

A much more generous "partner", for instance, has been the Children's Investment Fund Foundation (CIFF) - an unlikely sponsor on the face of it as this charity's "mission" is "to demonstrably improve the lives of children living in poverty in developing countries by achieving large scale and sustainable impact" (as well as splitting infinitives).

Yet, despite this, in the financial year ending 31 August 2008, the foundation funded the ECF with a £2,527,973 grant "to support advocacy issues on climate change and energy in the European Union aimed at dramatically reducing the region's greenhouse gas emissions and helping the EU play a leadership role in multilateral climate protection.

If this seems a long way from the mission of improving the lives of children "living in poverty in developing countries," then it seems even more remote when CIFF tells us that the "transformative goal of this initiative in 2009 is that the EU provides leadership in Copenhagen and is poised to move credibly to a 30 percent emission reduction goal against 1990 levels by 2020."

Why a dedicated children's charity should suddenly take it upon itself to fund so generously a European climate advocacy group is less than clear. At least with the Ecofin Research Foundation, there was a very obvious motivation and some prospect of a pay-back.

There are few clues to be gained from the charity's founder, Christopher Cooper-Hohn. He is a fabulously rich hedge fund manager who has bestowed the best part of £1.5 billion to his charity, with a view to funding a wide range of good works from the investment income.

Certainly, CIFF seems to have caught the climate "bug" quite late, having only recently launched its own special initiative on climate change, employing amongst others Kate Hampton, former head of the climate change campaign for Friends of the Earth International. And, to make up for lost time, it has spent £3,018,953 on climate change, including £175,000 on the Catalyst project.

Therein, possibly, is the link. The founder of that project is George Polk, a "serial entrepreneur" and most recently CEO of The Cloud Networks Ltd, the leading broadband wireless network operator in Europe. He is known to have close links with the powerhouse of CIFF, Jamie Cooper-Hohn, the wife of the great hedge fund manager and CEO of the charity.

CIFF's interest in climate change corresponds almost exactly with a change in Polk's career path, when he stepped down as CEO of The Cloud in early 2007 to focus on climate change. Not only did he found the Catalyst project, he also started up the European Climate Foundation, where he served as CEO and chairman of the executive committee. Other activities were to serve as an advisor to Climateworks and as a senior advisor on climate change to McKinsey & Company.

But Polk's main interest in life is his role as the managing partner of Soros Climate "a new $1 billion initiative by George Soros to invest private equity in ways which accelerate the development and diffusion of climate change technologies and business models." And it was Soros who created something of a stir at Copenhagen, suggesting the launch of a $150 billion financial plan.

Polk, however, has yet another interest in his busy life. He sits on the executive board of an outfit called the Carbon War Room, founded by Richard Branson, of Virgin fame, and Craig Cogut. The latter, of course, is founder and co-managing partner of Pegasus Capital Advisors, which claims as one of its "strategic advisors" a certain Rajendra K Pachauri – for which post, he claims, he is paid nothing.

Thus, we have a gilded circle of the wealthy, all in the climate change business to make a buck or two, and all in some way connected to a network of environmental "charities", which are dishing out funds to activists at the sharp end, many of whom will be quite unaware of who their ultimate paymasters are.

And, if the hedge-fund contribution from CIFF - of over $2 million to the European Climate Foundation - looks generous, this is nothing compared with Polk's other venture, Climateworks. This organisation emerged from a study commissioned by six foundations: The William and Flora Hewlett Foundation; The David and Lucile Packard Foundation; The Energy Foundation; Doris Duke Charitable Foundation; The Joyce Foundation; and The Oak Foundation.

Remarkably, in 2008, the William and Flora Hewlett Foundation awarded $481,505,182 to the ClimateWorks Foundation. And ClimateWorks is another of those "funding partners" of the European Climate Foundation – having donated an unspecified sum to help set it up.

With all that money flowing around, however, readers will be pleased to learn that Dr R K Pachauri was not left out. In 2007, The Energy Foundation gave him, via TERI-NA, the sum of $75,000 for "an educational outreach campaign to promote the 4th Assessment Report" (see page 43) – crumbs from the rich man's table, but every little helps.

PACHAURI THREAD
Posted by Richard at 17:35