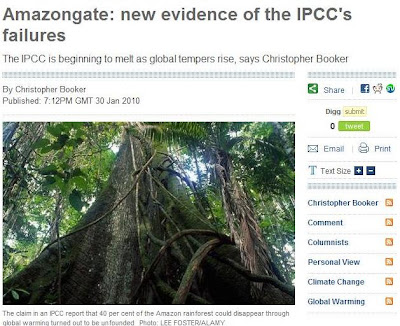 The Booker column is up, with the headline: "Amazongate: new evidence of the IPCC's failures". This is the start of the final phase of the IPCC's meltdown.

Actually, the Amazon story only occupies one paragraph of the column, with the newspaper reacting to the building publicity by hyping it up in the headline. Booker actually addresses the wide-ranging failures of the IPCC, including a reference to Montford (of Bishop Hill fame) and his brilliant book The Hockey Stick Illusion. Buy it.

Booker concludes, of the IPCC that: "Bereft of scientific or moral authority, the most expensive show the world has ever seen may soon be nearing its end."

The hapless Harrabin is driven to play down the importance of this latest development, claiming that the inclusion of the WWF reference "is a blunder perhaps, but maybe of a different kind, because there is indeed plenty of published science warning about drought in the Amazon."

In so doing, he distorts the thrust of the Rowell Moore argument, which claims that "40% of Amazonian forests could react drastically to even a slight reduction in precipitation."

First of all, the figure is entirely unsubstantiated and secondly, although there is plenty of evidence that severe or prolonged drought can damage tracts of forest, there is no good (or any) evidence that a "slight reduction in precipitation" could have the drastic effect predicted.

Of special note, though, is Harrabin's choice of expert to back up his argument. He cites Dr Simon Lewis from Leeds University, who told him: "The IPCC statement is basically correct but poorly written, and bizarrely referenced." The full significance of this will not become apparent until my next post, so this is just a marker ... we will see Lewis in a different light.

Harrabin, though, is forced to concede that there are problems, stating: "It all points to the need for much greater transparency, though that will throw up issues of its own for a body striving to offer a coherent view to policymakers of an issue dominated by risk, uncertainty and values, rather that unambiguous science."

That this is the main problem is wishful thinking on his part. The IPCC is holed below the waterline, and our little BBC man is trying to stem the leaks with a paper tissue.

(Note – I'm starting a new forum thread, as below, and will shut down the others tomorrow, to give us all a fresh start.)