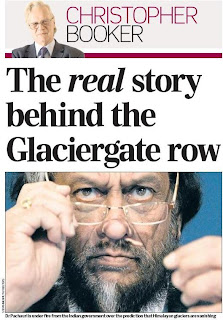 Booker reports in his column "a further dramatic twist to what has inevitably been dubbed 'Glaciergate'".

Partly rehearsed in our previous story, Booker thus brings to a wider audience the remarkable tale of Dr Pachauri who has distanced himself from the IPCC's baseless claim about vanishing glaciers yet is now employing the very man who made those claims.

The piece serves, therefore, as an admirable summary of the multiple posts we have written on the issue, including a reminder that this issue is far more important globally than is indicated by the coverage in the Western media.

To understand why the future of Himalayan glaciers should arouse such peculiar passion, Booker writes, one must recall why they have long been a central icon in global warming campaigners' propaganda. Everything that polar bears have been to the West, the ice of the Himalayas has been – and more – to the East.

This is because, as Mr Gore emphasised in his Oscar-winning film An Inconvenient Truth, the vast Himalayan ice sheet feeds seven of the world's major river systems, thus helping to provide water to 40 percent of the world's population.

The IPCC's shock prediction in its 2007 report that the likelihood of the glaciers "disappearing by the year 2035 and perhaps sooner is very high" thus had huge impact in India and other Asian countries, and it is precisely this statement that the IPCC has now been forced to disown.

Booker also reminds us that last November, Dr Raina, the country's most senior glaciologist, published a report for the Indian government showing that the rate of retreat of Himalayan glaciers had not increased in the past 50 years and that the IPCC's predictions were recklessly alarmist.

He recalls that this provoked the furious reaction from Dr Pachauri that tarred Dr Raina's report as "arrogant" and "voodoo science". Only weeks later came the devastating revelation that the IPCC's own prediction had no scientific foundation.

It was not until last week, when The Sunday Times put the issue firmly in the public domain that RK Pachauri finally began to acknowledge that there was a problem with his IPCC report. But, in typical style, he chose to disown his own report, saying that the offending paragraphs were "the work of independent authors" They're responsible, he said – he had "absolutely no responsibility" for the blunder.

But, now that Pachauri has suffered the humiliation of having to admit that his report was wrong all along, we see revealed the part played in this fiasco by a senior member of his own TERI staff. It appears, concludes Booker, that what we may soon be looking at here is not just "Glaciergate" but "Pachaurigate".

More on Watts up with that?

PACHAURI THREAD
Posted by Richard at 20:53