Pachauri: there's money in them glaciers 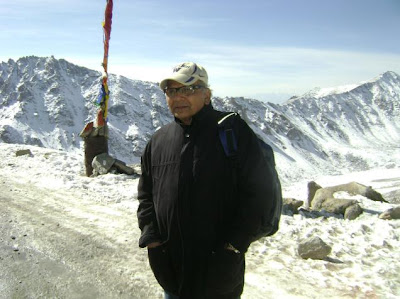 Syed Hasnain (pictured), the scientist at the centre of the growing controversy over melting Himalayan glaciers (not), is now working for Dr R K Pachauri's TERI as head of the institute glaciology team, funded by a generous grant from a US charity, researching the effects of the retreat.

Highlighted in The Sunday Times yesterday, Dr Hasnain was the scientist responsible for claiming that the world's glaciers were melting so fast that those in the Himalayas could vanish by 2035. This was picked up by the New Scientist and then by a 2005 WWF report, and subsequently published as a definitive claim in the IPCC's 2007 fourth assessment report, masterminded by Dr R K Pachauri.

But, while Dr Hasnain, who was then based at Jawaharlal Nehru University in Delhi, has admitted that the New Scientist report was based on "speculation" and was not supported by any formal research, he is now a direct beneficiary of that speculation.

Using Dr Hasnain's claim that the Himalaya glaciers "will vanish within forty years as a result of global warming…resulting in widespread water shortages," Pachauri's "alarmism" was bolstered by the WWF report which stated:

As apocalyptic as it may sound, it needs to be underlined that glaciers need to be studied for a variety of purposes including hazard assessment, effects on hydrology, sea level rise and to track climatic variations. There are several problems associated with retreating glaciers that need to be understood in order to proceed to the next stage of quantifying research and mitigating disaster.

With the case for more research thus established, Pachauri's institute, TERI, approached the wealthy Carnegie Corporation of New York through a consortium led by the Global Centre for funding to carry out precisely the work to which his own "independent" report had drawn attention.

In November 2008, they were successful, being awarded a $500,000 grant for "research, analysis and training on water-related security and humanitarian challenges to South Asia posed by melting Himalaya glaciers." This helped Dr Pachauri set up the TERI Glaciology team, putting at its head now professor Syed Iqbal Hasnain.

The Global Center is an Icelandic-based private institute with links to the office of the president of Iceland, Olafur Ragnar Grimsson. Its aim is to establish "a major research and training program involving scientists from South Asia, Europe and the Americas," of which Dr Pauchari's TERI India is a central part.

Thus, this month, on 15 January, Iceland president Grímsson and Dr Pachauri, together with a team from Ohio State University, launched their collaborative programme, declaring that TERI and the Carnegie Corporation of New York had "joined hands" to work in the fields of glaciology and soil science.

The purpose of the joint effort, they said, was "to improve understanding of the effects of climate change on the Himalaya and the manifold consequences that follow for the possibilities of water management and food production on the plains below."

The research fund is also to be topped up from the $108,000 proceeds of the Nehru Prize awarded to Grímsson this month.

Nevertheless, Dr Hasnain does not seem always to be upholding his earlier "speculation". He was "on message" in November 2008 but, on the first day of the two-day conclave on "Indian Himalayan glaciers, change and livelihoods" in October 2009, he told his audience that scientists projected "a 43 percent decrease in glacial area on average by the year 2070 and 75 percent decrease by the end of 21st century at the current warming rate" – a very far cry from disappearance in 2035.

However, with the addition of EU funding, Dr Hasnain can afford to be more candid. He has been able to set up a major research facility at Latey Bunga, Mukteshwar, with several outstations in what is now a well-resourced operation.

Meanwhile, Dr Pachauri, head of the parent research institute, TERI, and a "full-time salaried employee", is seeking to disown his own 2007 report. Despite having dismissed criticism of it by the Indian government as "voodoo science", he told an Indian news agency today that he washed his hands of the controversy saying he has "absolutely no responsibility".

Still, with $500,000 in the bank, and EU money flowing into the coffers, the report has served its purpose and he can afford now to walk away from it.

PACHAURI THREAD
Posted by Richard at 15:27