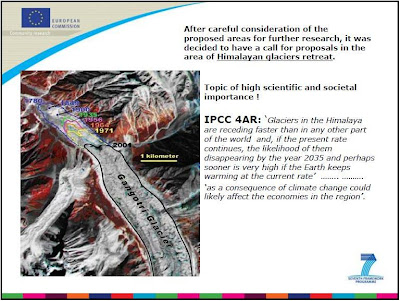 Both The Sunday Telegraph (Booker column) and The Sunday Times reveal that the IPCC was not the only organisation caught out by Dr Hasnain's spurious claim that Himalayan glaciers would disappear by 2035. The EU fell for it as well, without checking its scientific authenticity.

Driven by this claim, officials from the EU's multi-billion euro "Framework 7" research programme were so alarmed at the prospect of a rapid glacial melt that they decided to "call for proposals" in the area of Himalayan glaciers retreat, describing the proposed project as "a topic of high scientific and societal importance!"

This was revealed at a seminar on 13 May 2009 when Anastasios Kentarchos, a senior official from the EU commission's Environment Directorate, DG – Research - made a presentation (see frame pictured above) , which refers to Dr Pachauri's fourth assessment report for the IPCC, specifically citing the 2035 date.

The presentation was given during the opening session of an Open Science Seminar (pictured below) organised to discuss the "Future of Water Resources in India under a Changing Climate". 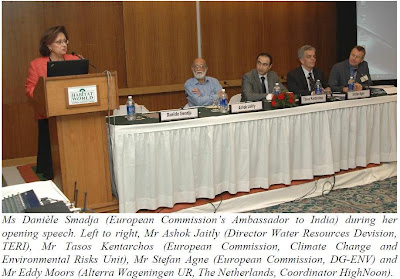 At the seminar, which was hosted by R K Pachauri's institute, TERI, and held in its New Delhi office location, Pachauri was also a keynote speaker and Dr Syed Hasnain was also believed to be present. The seminar was intended to kick-off the EU funded High Noon project aimed at researching the effects of the glaciers melting.

Nor was this the first time Dr Hasnain's claim has been adopted by the EU. In its "State of the Art" webpage introducing the "High Noon" project, it references the same 2005 WWF document used in the IPCC forth assessment report. The webpage notes, in respect of the glacier melt, that: "Reviews from the region suggest that the timescales are short, may be the 2040s... ", citing: "World Wildlife Fund 2005".

Six days after Anastasios Kentarchos's presentation, the EU formally announced - again in New Delhi – the start of the €3 million project, revealing that TERI was to be a beneficiary of the funding.

This may not have come as a surprise to Dr Pachauri. A resident at 160 Golf Links, in New Delhi's "millionaires' row", the office of the EU commission in Delhi is situated at 65 Golf Links – making them practically next door neighbours.

At the time of the announcement and for nearly two years, Dr Hasnain – the originator of the 2035 claim – had been working for Dr Pachauri and was to lead the TERI glaciology unit implementing the EU-funded research.

TERI had already been awarded a major part of a $500,000 grant from the Carnegie Corporation of New York, also to research the effects of melting glaciers, although this was not to be formally announced until 15 January this year.

As with the EU project, reference was made to Dr Hasnain's claim, with the grant award citation reading: "One authoritative study reported that most of the glaciers in the region “will vanish within forty years as a result of global warming…resulting in widespread water shortages." Again, as with the EU project, Dr Hasnain was to lead the research programme.

The issue of Pachauri using IPCC claims as a means of attracting funding to investigate melting glaciers was first raised by this blog on 17 December, his financial interest largely explaining his hostile reaction to criticism of Dr Hasnain's claim retailed by his own report.

Since the extent of the funding has become clearer, and the link with Hasnain have fully emerged, the response from both Pachauri and Hasnain has been denial and contradiction.

Now, with two heavyweight newspapers pitching in, the pair may find it harder to sustain their denials of what is very clearly documented evidence of conflict of interest and, on Dr Pachauri's part, a misuse of public office. His refusal to resign looks thinner by the minute.

PACHAURI THREAD
Posted by Richard at 19:21