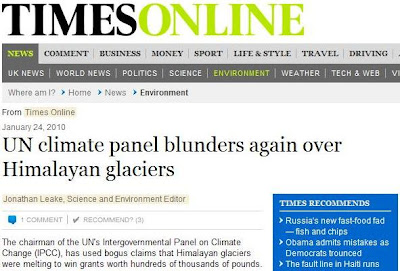 So writes Jonathan Leake, picking up the latest developments on "Glaciergate", storming in with the charge, "The chairman of the UN's Intergovernmental Panel on Climate Change (IPCC), has used bogus claims (as highlighted by Leake last week) that Himalayan glaciers were melting to win grants worth hundreds of thousands of pounds."

You don't get much stronger than that, as Leake tells us: "Rajendra Pachauri's Energy and Resources Institute (TERI), based in New Delhi, was awarded up to £310,000 by the Carnegie Corporation of New York and the lion's share of a £2.5m EU grant funded by European taxpayers."

This means, says Leake, that EU taxpayers are funding research into a scientific claim about glaciers that any ice researcher should immediately recognise as bogus. The revelation comes just a week after The Sunday Times highlighted serious scientific flaws in the IPCC's 2007 benchmark report on the likely impacts of global warming.

The IPCC had warned that climate change was likely to melt most of the Himalayan glaciers by 2035 - an idea considered ludicrous by most glaciologists. Last week a humbled IPCC retracted that claim and corrected its report. Since then, however, The Sunday Times has discovered that the same bogus claim has been cited in grant applications for TERI.

To be fair, Leake did actually spot the powerpoint presentation illustrated in our earlier piece and on Watts up with that?. That really is the "smoking gun" as far as the EU funding goes.

From the belly of the beast, we find that the EU launched a research project on the back of the IPCC's glacier claims, only to award a goodly amount of money to Pachauri and, via him, Dr Hasnain, the man he now employs and was responsible for the bogus claim in the first place.

That said, we get a link to this blog on the sidebar of the story, but under the heading "how bloggers helped break the story", which is stretching it a bit considering we first reported on "High Noon" on 17 December – but it is probably about as far as the MSM can go in acknowledging the "new media".

That, though, is a very minor irritation. The important thing is that both The Sunday Telegraph and now The Sunday Times have done the story. Pachauri will find this very difficult to ignore. My guess is that he is unlikely to survive this combined assault, despite continued denials from Pachauri and Hasnain.

For EU Referendum readers, the rest of the story will be pretty familiar, although Leake puts it in focus, observing that: "Any suggestion that TERI has repeated an unchecked scientific claim without checking it, in order to win grants, could prove hugely embarrassing for Pachauri and the IPCC."

He (Leake) also picks up on the Mail Today story in the Indian press, reporting that in India questions are also being asked about Pachauri's links with GloriOil, a Houston, Texas-based oil technology company that specialises in recovering extra oil from declining oil fields.

Pachauri is listed as a founder and scientific advisor. Critics, writes Leake, say it is odd for a man committed to decarbonising energy supplies to be linked to an oil company.

Thus, concludes Leake, "problems come at a bad time for the IPCC which is recruiting scientists for its fifth report into the science and impacts underlying global warming."

Yesterday, of course, Pachauri said he intended to remain as director of the IPCC to oversee the fifth IPCC assessment report dealing with sea level rise and ice sheets, oceans, clouds and carbon accounting.

Amazingly, during the press conference yesterday, Pachauri asserted that his response to the "error" in the IPCC report means that the IPCC's credibility has increased. I give him, a week.