And the "professionals" write? 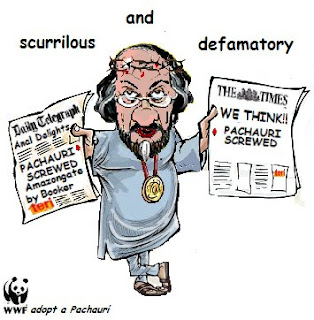 "It can be revealed," write Richard Gray, science correspondent and Rebecca Lefort, in The Sunday Telegraph that the IPCC report made use of 16 non-peer reviewed WWF reports.

The strap line reads: "The United Nations' expert panel on climate change based claims about ice disappearing from the world's mountain tops on a student's dissertation and an article in a mountaineering magazine," and we are told that this "revelation will cause fresh embarrassment for the (sic) The Intergovernmental Panel on Climate Change (IPCC), which had to issue a humiliating apology earlier this month over inaccurate statements about global warming."

Superficially, this looks like good stuff. But it goes downhill fast. The intrepid pair go on to write:

One claim, which stated that coral reefs near mangrove forests contained up to 25 times more fish numbers than those without mangroves nearby, quoted a feature article on the WWF website. In fact the data contained within the WWF article originated from a paper published in 2004 in the respected journal Nature.

In another example a WWF paper on forest fires was used to illustrate the impact of reduced rainfall in the Amazon rainforest, but the data was from another Nature paper published in 1999.

... which is followed by this:

When The Sunday Telegraph contacted the lead scientists behind the two papers in Nature, they expressed surprise that their research was not cited directly but said the IPCC had accurately represented their work.

Whaaaaaaaaaaa? What kind of hackwittery is this? Are they barking mad or just stupid? Or what? There we have "Amazongate" breaking out into the MSM, with Booker in the same newspaper writing:

This WWF report, it turned out, was co-authored by Andy Rowell, an anti-smoking and food safety campaigner who has worked for WWF and Greenpeace, and contributed pieces to Britain's two most committed environmentalist newspapers. Rowell and his co-author claimed their findings were based on an article in Nature. But the focus of that piece, it emerges, was not global warming at all but the effects of logging.

These children have missed the point completely. In this post and then this, we show that the assertions made by the WWF paper are not in any way supported by the Nature paper and actively misrepresent its findings.

But hey, Richard Gray and Rebecca Lefort are real journalists. They are the professionals. So they ring up the authors of the Nature papers who tell them the IPCC "had accurately represented their work". And that's what goes in the newspaper, contradicting Booker and missing a front-page story.

Meanwhile, Robert Mendick and Amrit Dhillon, hot on the trail of Pachauri – whom they describe as "the world's most powerful climate scientist" – write a 750-word news piece on his "racey (sic) romantic novel." They can't even spell "racy".

To cap it all, in a totally wasted opportunity, the paper writes a leader on it. And then they wonder why The Sunday Telegraph is haemorrhaging readers and losing money.