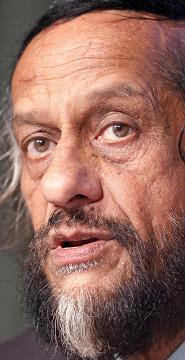 With the corruption behind "Glaciergate" now being revealed, Bishop Hill picks up on today's Pachauri special, with the great man defying the world and declaring that he will not resign.

In a discussion with an Indian journalist, this afternoon, I recommended that R K spent a little time watching video clips from presidents Nixon and Clinton – to give him a feel of how denying the undeniable rarely leads to success (unless your name is Chirac, of course).

Somewhat reinforcing that observation, The Australian retails the views of Fred Pearce saying that the stakes are now dangerously high for Rajendra Pachauri, the head of the Nobel Prize-winning IPCC.

"People who want to undermine the science on climate change will be crawling over the report looking for another mistake like this," ha says, "and if they do find another one it will be curtains for Pachauri." Pearce adds: "The way he has handled this glacier issue means he's now a sitting duck if anything else turns up."

Geoffrey Lean shares the sense of crisis, observing that "this now worsening fiasco is much more serious that the much-hyped so-called Climategate row". It reveals, says Lean, "enormous sloppiness in the handling of scientific data by, the IPCC whose authority rests on a meticulous and conservative approach to the science."

Gradually, Pachauri's friends and supporters are peeling away. The only real decision now facing the man is whether to jump now or wait until he is pushed. After tomorrow's rash of stories, even he might decide on the former.

PACHAURI THREAD
Posted by Richard at 17:27