And now for Amazongate


CAUTION: read with this piece. 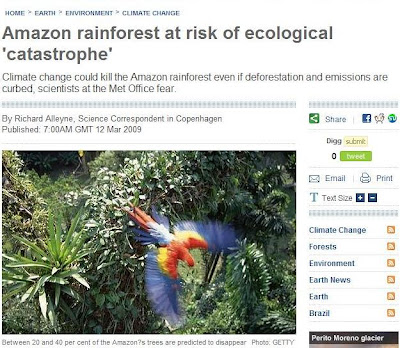 The IPCC also made false predictions on the Amazon rain forests, referenced to a non peer-reviewed paper produced by an advocacy group working with the WWF. This time though, the claim made is not even supported by the report and seems to be a complete fabrication

This is to be found in Chapter 13 of the Working Group II report, the same part of the IPCC fourth assessment report in which the "Glaciergate" claims are made. There, is the startling claim that:

At first sight, the reference looks kosher enough but, following it through, one sees:

This, then appears to be another WWF report, carried out in conjunction with the IUCN - The International Union for Conservation of Nature.

The link given is no longer active, but the report is on the IUCN website here. Furthermore, the IUCN along with WWF is another advocacy group and the report is not peer-reviewed. According to IPCC rules, it should not have been used as a primary source.

Firming up the WWF link, the second of the two authors, Dr P F Moore, is cited as the coordinator of the World Wide Fund for Nature (WWF) and World Conservation Union (IUCN) Project FireFight South-East, Asia, Bogor, Indonesia. He works for both organisations.

His reported comments on the Amazonian rain forests are interesting, as he is by no means an Amazon specialist – or even a climate specialist. His cv tells us:

My background and experience around the world has required and developed high-level policy and analytical skills. I have a strong understanding of government administration, legislative review, analysis and inquiries generated through involvement in or management of the Australian Regional Forest Agreement process, Parliamentary and Government inquiries, Coronial inquiries and public submissions on water pricing, access and use rights and native vegetation legislation in Australia and fire and natural resources laws, regulations and policies in Indonesia, Vietnam, Thailand, South Africa and Malaysia.

Perhaps, then, the lead author, Rowell A, is a more experience academic, with direct knowledge of the Amazon basin? Sadly, he is not. Andy Rowell, is an investigative freelance journalist and a green activist who writes occasionally for The Guardian and The Independent. His cv tells us:

Andy Rowell is a freelance writer and Investigative journalist with over 12 years' experience on environmental, food, health and globalization issues. Rowell has undertaken cutting-edge investigations for, amongst others, Action on Smoking and Health, The Campaign for Tobacco-Free Kids, Friends of the Earth, Greenpeace, IFAW, the Pan American Health Organization, Project Underground, the World Health Organization, World in Action and WWF.

.Thus, the IPCC is relying for its assertions that "up to 40% of the Amazonian forests could react drastically to even a slight reduction in precipitation" on a free-lance journalist/activist and a specialist in policy and analysis relating to forest fires in Australia, Asia and South Africa. At least, though, Andy Rowell need not fear being misquoted by a journalist. He is a journalist.

But then, it appears, it is not another journalist that either need fear, but the IPCC. The assertions attributed to them, that "up to 40% of the Amazonian forests could react drastically to even a slight reduction in precipitation" is nowhere to be found in their report. The closest match we can find is:

In this context, we have to remember that not all forest fires are bad. However, the effects of El Niño on the Amazon could have global repercussions. Of major concern for the Amazon is the way El Niño affects the region, causing increased precipitation in the South of the country and intense dryness in the North, just where the rain is needed in the Amazon basin - home to 70% of the remaining humid forest on the globe.

Predictions are for increased dry weather in the Amazon, which could significantly affect the equilibrium of the rainforest, by making it more susceptible to burning.

Nor elsewhere can we find any other reference to 40 percent of the Amazon being affected by even slight reductions in precipitation. On the contrary, we find that the WWF did produce its own report on the Amazon. There it states:

Large-scale tree death from drought is a surprisingly rare event, but is critical to understanding how small changes in rainfall could push big areas of Amazon forest beyond their ecological tipping points. One of the great ecological puzzles of the Amazon forests is their ability to withstand severe seasonal drought with no visible signs of drought stress. Indeed, some researchers have reported satellite evidence of an early dry season "greening up" of the Amazon forest canopy [Saleska et al. 2007, Myneni et al. 2006].

The report goes on to say:

Amazon forest drought tolerance has its limits, however, and it is in understanding these limits that we begin to realize how close these ecosystems are to their tipping point. A seven-year experiment was recently conducted to identify the level of drought stress beyond which Amazon forests would begin to "fall apart" through tree mortality. Rainfall was reduced by one third for five consecutive years in a one-hectare forest plot using 5,600 plastic panels placed above the soil (Nepstad et al. 2002).

During the third year of the experiment, a drought threshold was reached. The forest's giant canopy trees began to die as they ran out of water in the upper 11m of soil (Nepstad et al. 2007). Trees representing 10 per cent of the total weight of all the trees in the forest died in the course of a single year. It appears that even these remarkable, deeply-rooting, giant trees succumb to drought and die if they cannot absorb enough water from the soil to supply their leaves with new water to replace that lost through transpiration.

The El Niño episode of 1997-1998 may have pushed about one-third of Amazon forests close to this threshold of death-inducing drought (Nepstad et al. 2004, Figure 2), although few measurements are available from the field to know exactly how extensive the damage was. In the central Amazon, tree mortality increased 50 per cent following this drought (Williamson et al. 2000).

In other words, although there is evidence – as you would expect – that the forest would suffer from reduced rainfall, the evidence adduced here (and in other papers) is that fairly drastic and prolonged shifts in rainfall patterns are needed before serious damage occurs, and then nothing like 40 percent.

In all, then, the IPCC claim is a fabrication, unsupported even by the reference it gives, which it should not in any event have used as it is not a primary source.

The significance of this cannot be understated. Together with polar bears and melting ice-caps, and melting glaciers, the Amazon rain forests are iconic symbols for the climate change industry, and their potential loss was fully exploited at December's Copenhagen summit.

There, the dire predictions from the IPCC were treated as a baseline, and then expanded upon by others and reported widely, adding to the sense of doom and crisis.

Well sourced reports, however, put logging and farm expansion as the major threat to the rain forests, climate change being just another factor which exacerbates the damage. But this was not good enough for the IPCC, which wanted to hype up crisis. And, as with melting glaciers, it did so using exactly the same technique of making an assertion unsupported by the "science" it holds as so important. 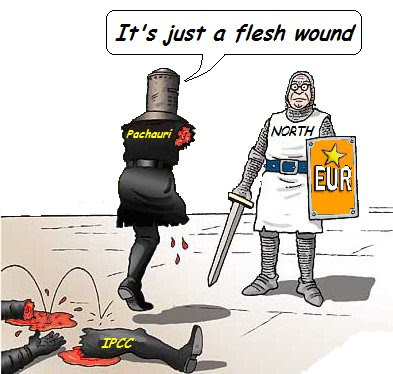 The glaciers claim is said to be a "mistake" by Rajendra Pachauri, chairman of the IPCC. But, as Lady Bracknell might have said, to cite one WWF report may be regarded as a misfortune; to cite two looks like carelessness. And what will Rajandra say to that?

PACHAURI THREAD
Posted by Richard at 10:24