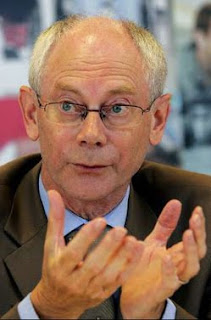 The EU should consider forming a rapid reaction force to deal with future emergencies like the Haiti earthquake. This is according to "the EU's new president," retailed to us by the ever diligent BBC.

"We have to reflect about a better instrument for reaction," says Herman Van Rompuy. After providing emergency aid to Haiti the EU should consider a "humanitarian rapid reaction force", he said.

In fact, the EU set up a "Rapid Reaction Mechanism" in 2001, under Council Regulation (EC) No 381/2001 – with the intention of dealing with precisely the eventualities that Rompuy is setting out, and which so lamentably failed in the 2004 Tsunami and again in Haiti.

In fact, the initiative goes way back to the European Council meeting in Helsinki on 10 and 11 December 1999, when the member state leaders gathered to discuss the European Union's "non-military crisis-management capability."

More than ten years on and we are no further forward than we were then – countless reports and study groups have been commissioned, there have been countless meetings, working groups and conferences, with millions of euros having been spent. Yet, when the chips are down, the EU is nowhere to be seen.

It was ever thus, and will always be so. All the EU is ever good for, when it comes to action on its own part, is talk. But this is not "victimless" state of affairs. Because the issue is being dealt with at a "European level", member states are actively discouraged from making their own plans and arrangements.

Thereby, national capabilities are wound down yet, in the lethargic, inept grip of the EU institutions, nothing is done to replace those capabilities – still less to enhance the overall effort. And, when there is a crisis, because the EU claims the lead role in responding, no member state can step forward to fill the vacuum created by the EU's painfully obvious inadequacies.

Thus, once again we get clarion calls (if anything Rompuy says could be called "clarion"), dusting off ancient press releases to demand yet again a "humanitarian rapid reaction force". In ten years time, no doubt, they will be recycling the same press releases, demonstrating, once again, that using "EU" and the word "rapid" in the same sentence is an oxymoron.

Yet, despite its ongoing inadequacies, the one thing the EU will never do is recognise its own uselessness and walk away from its grand pretensions, leaving the heavy lifting to national agencies.

As in all things to do with the EU, its ambitions of glory outstrip any practical considerations. Even the lives of disaster victims are of little consequence when it comes to promoting the European agenda.