One rule for them 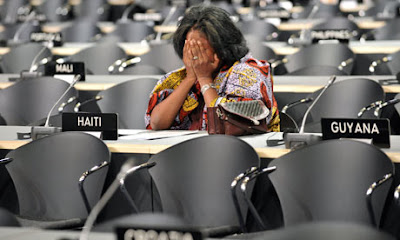 The Guardian is reporting that the UN Copenhagen climate talks are in disarray.

Apparently, developing countries have found out about a planned stitch-up engineered by the naughty "rich countries" like the UK, which proposes unequal limits on per capita carbon emissions for developed and developing countries in 2050. This means that people in developed countries would be permitted to emit nearly twice as much under the proposals.

This is the so-called Danish text, which has invoked fury amongst some of the delegates. Since the general objective was to drag the economies of the developed world back into the Stone Age, one can see why they are so upset.

Furthermore, horror of horrors, the plan is to marginalise the role of the UN, handing effective control of climate change finance to the World Bank, despite the UN's stunningly successful administration of the Iraqi Oil for Food programme.

A "senior diplomat" has described it as "a very dangerous document for developing countries. It is a fundamental reworking of the UN balance of obligations. It is to be superimposed without discussion on the talks".

Developing countries that have seen the text are understood to be furious that it is being promoted by rich countries without their knowledge and without discussion in the negotiations.

"It is being done in secret. Clearly the intention is to get [Barack] Obama and the leaders of other rich countries to muscle it through when they arrive next week. It effectively is the end of the UN process," said one (possibly the same) diplomat, who asked to remain nameless.

More shocks and horrors will doubtless follow. We are only in the second day of this 12-day slugfest.

CLIMATEGATE THREAD
Posted by Richard at 17:34