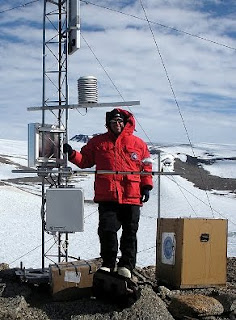 Some news reports on the "Climategate" affair, says the BBC's Richard Black, might have given the impression that the UK's Climatic Research Unit (CRU), and maybe the Met Office team that works closely with it too, has its own network of weather stations across the world and that somehow data from that network is collected, stored and processed separately from every other source of temperature data.

It's erroneous, says the man, and for pretty obvious reasons. If you have three or four major centres in the world doing climate analysis, why would they each set up and safeguard data from their own stations? Would a UK or US centre, for example, be allowed to set up its own weather station in Tibet? Would three agencies go through the financial and logistical pain of setting up their own instruments in Antarctica, say, when one could do it and share the data?

So all these "independent" organisations share the same data. And how does that make their results independent? And if they all apply the same "fudge factors", wouldn't their results all look very much the same? Unless we knew which raw data they used, what adjustments they made to those data, and what corrections they had applied during the processing of those data, how do we know what they are actually recording?

That is what Climategate was really all about – and none of the questions asked have been answered.

CLIMATEGATE THREAD
Posted by Richard at 15:10