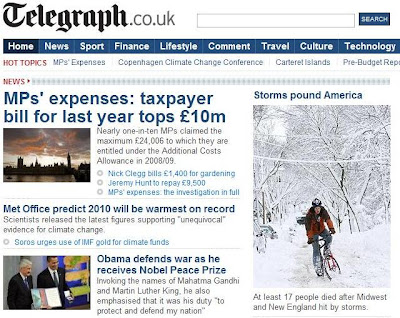 Just as The Daily Scarygraph is prattling on about next year being the hottest on record, its website page announcing the glad tidings (for the warmists) we get a much higher profile story on: "Deadly storm sweeps across America".

"At least 17 people have died after a huge storm swept across the American Midwest and New England," we are told. More than a foot of snow has fallen in 12 states as blizzard conditions buried cars under snowdrifts as much as 15 feet deep.

Most of the deaths were due to traffic accidents, the paper says. In Kansas, visibility dropped to only 50 feet while in Iowa a major highway was closed, leaving lorry drivers stranded. Hundreds of schools closed, thousands of homes lost power and flights have been cancelled across a wide area.

The Midwest is accustomed to bitterly cold winters but the strength of the storm, which also brought ice and 50mph winds, still took the region by surprise. In Madison, Wisconsin, the worst affected area, more than 19 inches of snow fell and the local university was closed for the first time in nearly 45 years. "It is a rare event because people are used to dealing with snowy conditions," said a university spokesman.

Nebraska received more than 10 inches of snow, the most the state has seen in December for 50 years. Des Moines, Iowa, recorded its second highest December snowfall – 12 to 15 inches – since records began in 1888.

Some call it the Gore effect - I can't think why. Meanwhile skiing looks excellent, worldwide - except where the snow is too deep for access.

CLIMATEGATE THREAD
Posted by Richard at 21:50