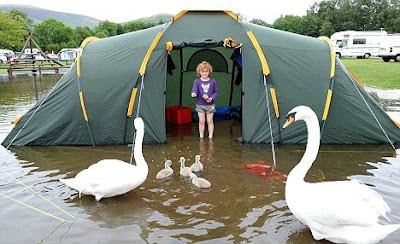 There is much coverage of – and derision about – the Met Office's ridiculous forecast for this year's summer.

But, unless I am missing something, not one of the articles makes the link between the lack of precision on these short-term forecasts and the apparent certainly with which the Met Office issues forecasts for 20, 40 and 80 years hence.

Instead, skirting round the subject, The Guardian actually informs us that climate change is another reason such forward-looking forecasts are desirable. As the atmosphere warms, it says, we can expect more extreme weather events, including heatwaves and flash floods, which may be picked up in advance by seasonal forecasts.

Equally, without so much as a blush, we get The Independent telling us:

The Met Office believes that the situation today with seasonal forecasts is about where we were 40 years ago with short-range forecasts. It is possible to give some indication of what is likely to happen over the next few months, but a more precise prediction is not yet possible.

Bearing in mind that none of the climate models predicted this current run of cooling, that statement comes as no surprise. Yet, we have a multi-billion pound climate change industry, all based on forecasts with have no basis in reality, and which – over the period of their generation – have been shown to be consistently wrong.

Surely, it requires no great leap of logic at least to speculate that, if the Met Office cannot get its short-term forecasts anywhere near right, then its longer term predictions must be equally suspect?

Once again, it seems, we have the media thinking in pre-ordained little compartments, unable or unwilling to see (or report on) the bigger picture.