A view from the blogosphere 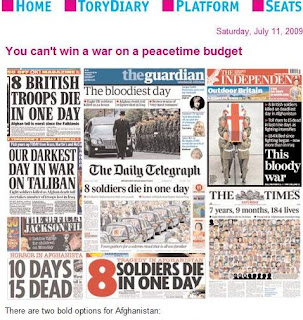 Things must be pretty desperate – or appear to be so – if Tory Boy Blog wakes from its torpor and suddenly realises there's a war going on in Afghanistan.

But having awakened from the sleep of the dead, its stunning contribution is to observe that: "You can't win a war on a peacetime budget". It is apparently unaware of the fact that the Labour government is pouring money into the military campaign, approximately £3.5 billion this financial year – equivalent to a ten percent top-up on the defence budget.

Since all this is achieving is to keep a reinforced brigade in position, mowing the grass and getting an increasing number of vehicles trashed – unfortunately with troops still inside them – it might not be a terribly bad idea to ask what the military is doing, much less achieving, with the money in supporting what must be one of the most expensive brigade deployments in the history of mankind.

For want of this, the fair Montgomerie, noting in passing that, "It is not clear what the Tory position is" (we are shocked, I tell you, shocked!), posits the idea that we might consider raiding the NHS to pay for this gold-plated war which boasts amongst its achievements the installation of a Ferris wheel for the grateful citizens of Lashkah Gar.

One can doubtless make a case for British grannies – and even aged Afghani immigrants – being deprived of their hip replacements to fund yet more Ferris wheels, but, needless to say, Mr Montgomerie does not make it. Instead, he offers the "bold option" espoused by his hero, president Obama, that of pledging to do "whatever is necessary to secure victory."

What "victory" might actually be and what we might need to do to achieve it, is of course not specified. Once it is achieved though, we can look forward to riding off into the sunset to the applause of grateful Afghanis, breaking clear of the crowds of crippled grannies clutching their Zimmer frames in agony.

But there you are – there is no need to think about what is actually needed. The Boy has actually spoken, demanding a "clarification of our mission", and that should be good enough for the legions of adoring fans who can now flock to the polling booths in the certain knowledge that the brightest minds in the land are on the case, and that we will do "whatever it necessary", once they've worked out what that is.