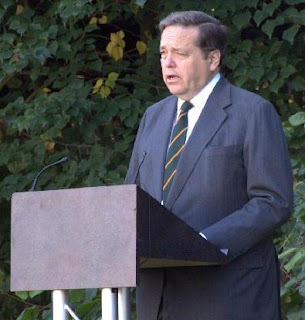 A fascinating interview with the Lord Salisbury is recorded in The Daily Telegraph today, with Benedict Brogan talking to a man who is familiar with the "dark art" of government.

Amongst the nuggets that emerge are his views that Parliament is in deep trouble because this Government holds the institution in contempt. Burkean judgment has been replaced by Platonic judges, he says. This, opines Brogan, is an elegant way of saying that MPs have abdicated responsibility in favour of unaccountable judges and bureaucrats.

Salisbury puts it more plainly: "The parliamentary muscle is atrophying and we now have a vast, complicated, self-referential bureaucracy."

We are referred to his recent pamphlet published by Politeia detailing the mess that Whitehall's security and defence committees have become. Salisbury illustrates how officials, faced with ministers who are unwilling to show judgment or take a lead on vital issues of national security, have allowed a vast tangle of a structure to develop, with no clear accountability or control.

A return to Cabinet government is urgently needed, he argues. Whitehall is "mired in treacle". A clear line of authority from officials to ministers has been lost and must be restored.

What then leaps from the page is Salisbury's views on the difficulties facing Cameron when he tries to implement his own agenda. "He will go into Whitehall and pull the levers and find that nothing works. I don’t think he realises how Whitehall has become so broken," says the noble Lord.

This has been going on a long, long time and his comments remind me of that interview I had with Roger Freeman which I recorded briefly on this blog. At the fag end of the Major government, in late 1996, he was then Chancellor of the Duchy of Lancaster, and I still recall him vividly standing at the window of his spacious office, overlooking Horse Guards.

"You know, Richard," he said to me. "You struggle to get to this elevated position as a high ranking Cabinet Minister where you are finally able to do things." Imagining a huge, old-fashioned signal box with all the gleaming brass levers, he then complained that, while he had "all the levers of power", they were "not connected to anything."

I recorded my experience of tramping the street of Whitehall, meeting ministers, high-ranking officials (one of whom treated me to a very fine and expensive lunch) and then MPs, ending up at midnight in the Central Lobby staring at the deserted grandeur and feeling the presence of ghosts of statesmen past.

The day had been punctuated by my putting the case of very serious problems emerging in the farming community (some sections of which I was then representing) which needed addressing very urgently. And all day I had been getting the same refrain – sympathy combined with profound regrets: "My hands are tied", I was told, leaving me to conclude that the only meaningful activity in Whitehall had become group bondage.

It is this progressive and serious breakdown in the mechanisms of government to which I was trying to draw attention, in my own lame and halting way, with the helicopter issue.

Projected through the prism of the media is the childish image of an all-powerful government, the prime minister at the helm – no doubt sitting, cat on lap, in his penthouse suite – with the levers of power arrayed before him, rattling off orders and instructions, his polished acolytes leaping into action.

Real life is not like that. The idea of a prime minister issuing "action this day" memoranda, thus galvanising a well-oiled machine into frenetic activity, is no more – if ever it was. All we have left is a dysfunctional machine which, as Salisbury puts it, is "mired in treacle".

Yet the myth has overtaken the reality, where all the ills of society are put down to that single hate figure, Gordon Brown, the all-powerful, all seeing head of that vast bureaucratic empire. This is exactly the dynamic we see over at Coffee House Blog from the ineffably lightweight Peter Hoskin, a dedicated subscriber to the myth.

Salisbury knows it isn't real. Anyone with anything beyond a "Janet and John" appreciation of the realities of modern government knows it isn't real – but the myth prevails. Nevertheless, the "ground truth", as they like to call it these days, is that the levers of power are not connected to anything.