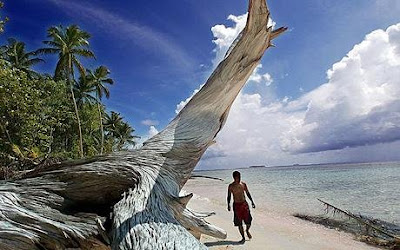 Embraced by the BBC and occupying nearly half a page in the print edition of The Daily Telegraph - the warmists' favourite newspaper – is an outrageous "puff" for the rather seedy government of Tuvalu, proclaiming that it is set to become the world's first zero-carbon country.

Missing from the on-line edition, however, is the short, but telling phrase which tells us that the state "relies on foreign aid as its main source of income". As such, the government is playing to its paymasters who have long exploited the totemic significance of an island that is supposed to be threatened with submergence as a result of rising sea levels due to climate change.

The premise is, of course, absolute tosh, debunked fully in the Booker column in March. That piece, incidentally, came under sustained attack from the warmists, via the Press Complaints Commission, which has been seen off.

Any halfway respectable and honest journalist would be questioning why about £12 million is to be spent on this fatuous and wasteful project, in a tiny, impoverished country, and why it is being used for a transparent propaganda exercise instead of being used to more worthwhile ends.

The uncritical presentation of this story, however, tells you a great deal about the modern media. It no longer offers news, but simply projects a series of narratives, shaping a "world view" to which the receiver is expected to conform. Any deviation from the narratives is treated as an abnormality, to be shunned, all in the interests of securing conformity.

It seems extreme, nevertheless, to categorise the media as the "enemy", but that it has become, by act and default in failing to challenge those influences which are encroaching on our freedoms and prosperity, while actively supporting those who would do us harm. The worst is that too few people recognise it for what it is, or has become.