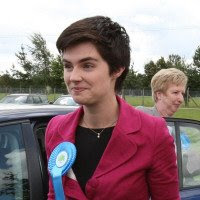 It says something either of this writer, politics in general, or both, that the by-election in Norwich North is very low down the batting order. But then, the only outcome is to vote in another "useless mouth" to the provincial parliament, while the real government gets on with its business in Brussels.

For the record, the "victor" was Conservative, Chloe Smith, 27 – a former "management consultant" and therefore able to bring her extensive experience of business into play, as to how to comply with EU legislation.

Interestingly, the turnout was 45.8 percent – pathetic but only to be expected – which means that the Tories now hold the seat with votes from just over 18 percent of the electorate. A sweeping mandate it ain't, especially as the majority is attributable more to a collapse of the Labour vote than a positive endorsement of the Cameron agenda.

Ukip's Glen Tingle apparently did quite well, bringing in 4,068 votes, taking 11 percent of the vote. Lib Dims only made 4,803 votes, two percent less than in the 2005 general election – a very poor showing for a party that is supposed to specialise in by-elections. Nick Clegg's message is not wowing the voters.

This did not prevent the Tories winning the seat, but this is a significant tranche of votes. If the minority vote holds up across the board in the general election (a very big "if"), we could see variations of the UKIP effect, with unpredictable results.

Predicting results is a mug's game at the best of time, so all that can be said is that this result injects an element of unpredictability into a situation already fraught with unpredictability. We could be in for an interesting time – or not.