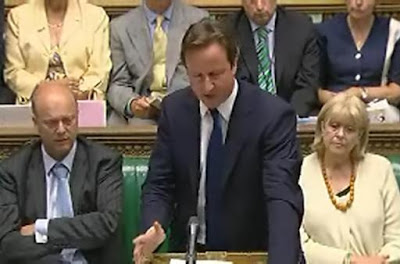 So it came to pass that, on the final Prime Ministers' Questions before the recess, David Cameron made as the focus for his set-piece attack on Gordon Brown ... helicopters in Afghanistan. Thus did he reflect the Tories' "line", selected at the weekend as the most profitable – and, for them, least embarrassing – area on which to score political points.

Now up on Hansard, we can read – without having to listen to the cheering, hooting and jeering which our honourable members so love – how Cameron steers the safe path, relying on formulaic questioning the like of which we have been hearing all week.

Without needing – or wanting - to go into the details, one can easily determine from the narrative the Boy's game plan. For the main evening news, he wants from Brown an admission that "the number of helicopters in Afghanistan is simply insufficient." Brown, on the other hand, knows that is the game plan and, furthermore, Cameron knows he knows. And Brown's game plan is quite simple – he is not going to make that admission.

Thus does the dreary charade play out. Cameron makes his pitch, Brown dead-bats it and the exchange goes nowhere, leaving the chef de claque to pronounce a 6-4 "win" for his Boy. This is politics à la blogosphere for you. Scintillating it ain't.

What the Boy could have asked, of course, is why the MoD did not follow the example of the Canadians: bring some Bell 412s into service, and hire some Mi-8 MTVs.

Cameron could also have asked why, since they are available off the shelf, the prime minister did not instruct the MoD to procure rapidly some UH-60 Blackhawks. And, for good measure – just to put the prime minister on the rack, he could have asked what steps were being taken to make good the sudden shortfall of capacity arising out of yesterday's events.

One can speculate as to why the Great Leader did not suggest these options but, given his party's view on the Future Lynx and other high-value procurement projects, it is not untoward to suggest that he has no more interest in expeditiously solving the helicopter "crisis" than does the General Staff.

Thus, do we see this obscene and ultimately sterile danse macabre where, to put it bluntly, the bodies of dead service personnel are but another tool to be exploited in the endless pursuit of headlines. And that is really what this is about, which makes the chef's "win" of 6-4 a tad sick. The real score is 184-0, and rising.