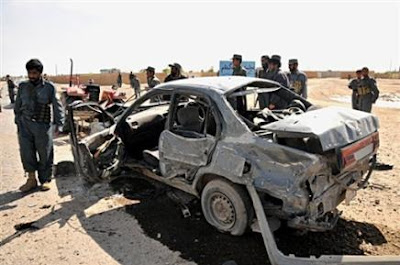 In projecting the progress of the counter-insurgency in Afghanistan, metrics most commonly by the media are the deaths of British soldiers and, more generally, the deaths of other coalition troops. Further "downstream" are reports of the deaths of Afghani citizens, both civilians, members of the security forces and such categories as security guards.

In the hierarchy of death, however, we have long been aware that there has been a ranking applied by the popular media – the emphasis (quite understandably) given to British troops. Much less attention is given to other nationalities and, down the scale, are incidents involving Afghanis, which are often completely unreported.

Much the same applied to the campaign in Iraq, to the extent where the death of even quite prominent Iraqis went unreported, sometimes dropped in favour of more prominent events, especially those with a domestic political content.

This, I remarked upon in Ministry of Defeat, in one instance noting that the murder of a prominent Sunni and his son in Basra – and the kidnap of five others - had gone unreported. The British media had focused on Tony Blair giving evidence to the House of Commons Liaison Committee, where he had been asked whether life was then better for the citizens of Basra than it had been pre-war.

This came up during the Frontline Club meeting yesterday, as an example of my unreasonable criticism of the media, the argument being that the news value of the Blair evidence far outweighed the murder and kidnap of a few Iraqis, even if these crimes had been committed by men in civilian clothes and police uniforms, in a fleet of 10 "official" cars with no number plates.

This, incidentally, had coincided with a six-hour curfew being imposed in Basra in an attempt to stem the growing tide of violence and a report that oil smuggling in southern Iraq had reached epidemic proportions, costing the country an estimated $4 billion a year, followed by yet another report of a rocket attack on a British base – none of which were reported in the British media.

What I had not realised, however, was that the ranking was quite formally structured. In the early days, of the occupation, one news organisation imposed a "tariff", reporting events only if they involved one dead British or American soldier, or five Iraqis. But, as the violence increased, the bar was raised where, to qualify for inclusion in a news report, three US soldiers or 25 Iraqis had to be killed. A British military death, of course, was always reported.

This, in my view, undoubtedly distorted British public perception of events – and indeed misled journalists. Relying on the metric of British military deaths as a comparator, in May 2005 Guardian journalist Jonathan Steele actually wrote that the insurgency barely existed in the south, it having been "quiet for months". British troops could pull out immediately, he declared.

Undeterred, the media is playing the same games in Afghanistan. We know, of course, that the reporting of British troops has been extremely high profile, with the toll reaching 22 for the month.

Yet, in the last two days, four Afghani soldiers have been killed in Helmand, their lives ended by an IED which hit their vehicle, and – in two separate incidents, eight and then four Afghani private security guards were killed, also by roadside bombs in Helmand, the first incident injuring four others. None of these incidents have been reported by the British media. You will have to turn to the official Chinese news agency Xinhuanet for details.

This news, however, is highly significant, for several reasons. First, it points up the perilous insecurity of the roads, where the death toll is actually far greater than the British media would indicate. Secondly, it reminds us of an important, but again ill-reported dynamic – that the Taleban is by no means confining its attacks to foreign security forces. The Afghan forces are at greater risk than our own.

Nor indeed are just the security forces are risk. There is also a steady and largely unreported toll taken of construction workers, another incident recently reported in Khost. And just over a week ago, 13 Afghan road construction workers were kidnapped in Paktia.

All these issues have a much wider significance. On the one hand, the strategic plan for Afghanistan is progressively to hand over responsibility for security to Afghan forces and, on the other, much depends on the coalition and aid agencies being able to deliver reconstruction. Where both the security forces and construction workers are so much at risk, neither is going to happen, even discounting the unreliability of the local police.

The other significant issue here – one we have noted before – is the media-supported demand to increase helicopter lift for British troops, to enable them to be transported without using the road network, to keep them out of harm's way. Yet, that very process – effectively abandoning the network to the Taleban – could delay progress, by exposing local security forces and others to greater risk.

Meanwhile, in Lashkar Gah, in the city's main bazaar, turban seller Haji Lala says Taleban black is still the most popular colour. "Everyone wants black, like the Taleban. I sell 40 or 50 a month." It may be an indicator of where ordinary people think the province is heading, notes Australian writer Jerome Starkey.

Whichever way the province is heading, it seems not unreasonable to aver that we will not find out from the British media. Whether it is even reasonable to suggest that they should tell us is another matter. The very firm view I heard expressed on Wedenesday was, effectively, that it was not. What matters, it seems, are news values – not the actual news.